When Was Paintball Invented? Celebrating the Origin of This Fun Hobby 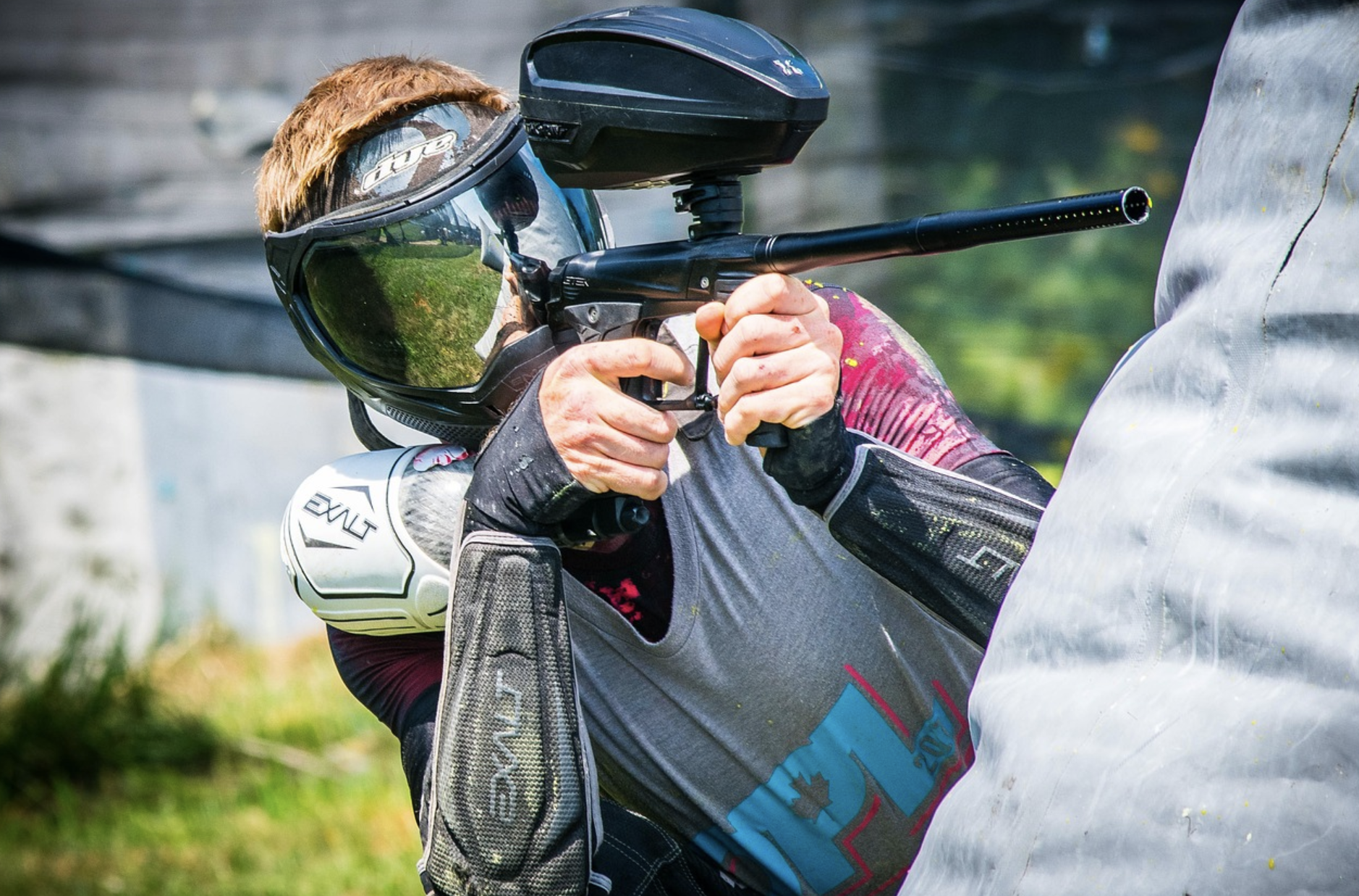 Paintball is an intense and competitive sport that offers a wide variety of playing fields. It consists of fast-paced strategies and tactics that can temporarily turn your closest friends into your focused enemy. But when was paintball invented?

It has become a popular game played on outdoor and indoor fields around the world. The sport reflects the unbelievable adrenaline rush that accompanies the hunt of each game.

So how did it all come to be?

When Was Paintball Invented?

The concept of the paintball marker was invented back during the mid-60s by a man named Charles Nelson. However, the sport of paintball is still relatively young, with the first paintball game played in May of 1981.

So now you know: When was paintball invented? But what happened between those years that transformed paintball into the popular game we love today?

To answer this, we have to dive deeper into some exciting paintball history.

History of the marker

When asking when was paintball invented, we must take a look back to the mid-60s.

During this time, Charles Nelson of the Nelson Paint Company was asked to create a device to assist foresters.

What he invented was the paintball marker.

The notion was to shoot a projectile of paint from the marker to mark trees or livestock. The device would save foresters and ranchers time by giving them the ability to mark from a distance.

Nelson approached the Crosman company to produce a marker gun that would shoot the paintballs. So the company developed the Crosman 707. However, after a few years of poor sales, Crosman halted production as a financial loss.

If only they knew how mistaken they were.

Years later, Nelson decided that he might have more success if he sold his paintball marker as a toy. With BB guns so popular, he contacted an airsoft company, known as Daisy, to construct the first paintball marker.

In 1972, the Daisy Manufacturing Company patented and manufactured the "Splotchmarker," which Nelson marketed as the famous Nel-Spot 007. This marker became a milestone in paintball history for use in the first ever game of the sport.

The Nel-Spot 007 was a bolt action or pump action marker in the shape of a pistol. Its robust design, reliability, and simplicity still place it in the gear bags of many players today.

The First Game of Paintball 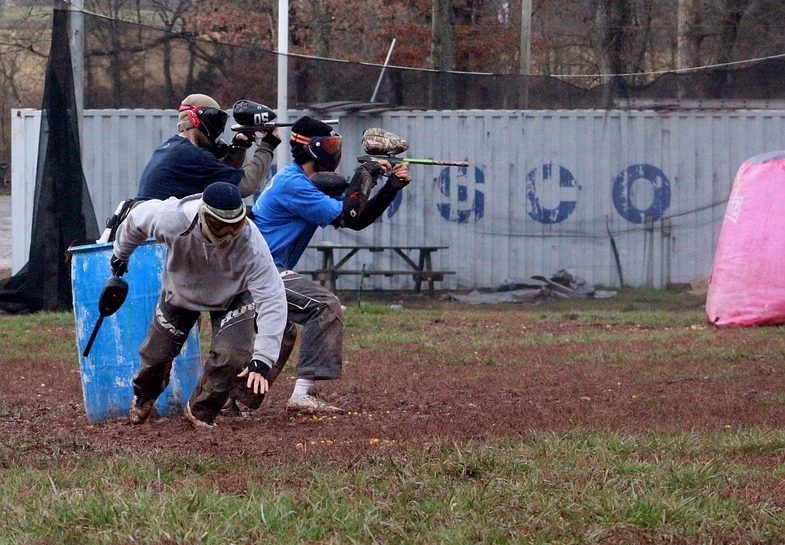 The first paintball game occurred on June 7, 1981, in the New Hampshire woods. However, the game didn't happen overnight. In fact, the discussion took place for the first time in 1977, between two friends, over drinks.

Years later, after seeing the Nel-Spot 007 in a catalog, the two friends set out to settle an ongoing argument — could a novice survive in combat against a trained hunter?

When looking into history to see when was paintball invented, you'll see it was nothing but a simple concept.

Testing their theory, Hayes Noel and Charles Gaines invited 12 friends to compete in a game of capture the flag. There were 4 flag stations, each with 12 flags matching each of the 12 people playing. The rules were simple: The first to capture all the flags without getting shot wins.

Half of the players comprised experienced avid hunters and the other half consisted of untrained city men.

Game-day took place on June 27, 1981. They armed 12 players with the Nel-Spot 007 paintball markers and set out into an 80-acre cross-country playing field.

Incidentally, the winner, Ritchie White, didn’t fire a single shot. Instead, he used strategic stealth tactics to collect all the flags, outsmarting his friends to win.

As the first 12 players stalked each other for eliminations and flags, they were not aware of the impact this simple experiment would have on extreme sports in the years to come.

Rise of the paintball industry

Shortly after the first game, one of the participants, Bob Jones, decided to write an article about the experience for Sports Illustrated Magazine. This instantly made the game of paintball famous and brought the sport to a whole new generation of players.

His article resulted in the unexpected flow of letters from people with requests asking how they could play the game.

The sudden popularity in the game proved to be a great business opportunity for the principal creators. Gurnsey, Gaines, and Noel started selling starter kits for what they called the National Survival Game (NSG).

The kit included a Nel-Spot marker, along with some paintballs and safety goggles. They also added an official rulebook for the game and a bonus compass as used by the first players.

Paintball as a Worldwide Sport

Bob Gurnsey opened the world's first commercial paintball field in New Hampshire in March 1982. And as we learn more about when was paintball invented, this was only the beginning.

Gurnsey began licensing out the NSG franchise to others who wanted to start their own fields. The sport transitioned from NSG to the name of paintball and began to make its way overseas in 1994.

With all these new burgeoning industries, paintball was standardized and more streamlined for consumer play.

Speedball and the rise of the semi-automatic marker

While learning when was paintball invented, it's also good to know how it advanced over the years.

In 1988, a new variation to the game called "arena ball" made its debut at a paintball field in California. Also known as speedball, it was a revolutionary addition to the world of paintball and an instant success.

This type of game was extremely fast-paced and usually lasted only three to four minutes at a time. The game required higher speed, and because of this, the 1990s soon saw a rise in demand for semi-automatic markers.

It was Tippman Pneumatics to release the first fully-automatic paintball gun: the Tippman SMG-60. Tippman remains among the most respected and well-distributed companies in the world today.

Accurate and fast to operate, these semi-automatic markers could generate very high rates of fire. However, semi-automatic electronic markers were heavy to carry. They were also considerably more expensive, making them not readily available to most players at the time.

Originally part of Kingman, Spyder Paintball made a name for itself by introducing a more affordable semi-automatic to the public. Known as the Kingman Spyder marker, an aluminum body made it much lighter than other semi-auto markers on the market.

Famous for their reliability, simple design, and ease of maintenance, these mechanical markers had high performance at a low cost. By doing this, Spyder significantly evened the playing field for those players on a tight budget.

Over time, the markers became more affordable and available on the market. Other brands started to manufacture them, and today there are several great speedball markers from which to choose. 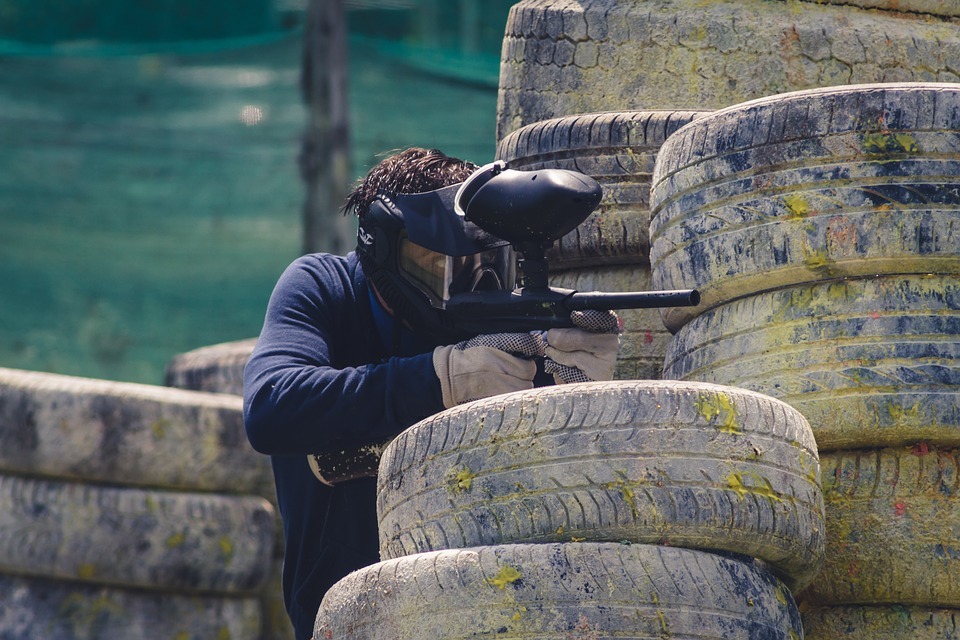 As the passion for paintball began the spread, it started to gain a more positive and safe reputation. More companies began to appear and take the opportunity in the sport, offering cheaper markers or specialized parts and gear.

While looking into the question of when was paintball invented, another milestone hit with the entry of electro-pneumatically operated markers.

Unlike pump markers, a circuit board controls power to electronic or electro-pneumatic markers with a 9-volt battery. The consistency is more accurate with a faster firing ratio due to the electric components.

In 2003, a company known as Smart Parts got a patent for paintball markers using an electro-pneumatic valve. Unfortunately, this also initiated a series of lawsuits regarding markers built during the pending patent period.

It also created a massive backlash against Smart Parts by many players of the game.

The event sent a shockwave through the industry, and several smaller manufacturers immediately ceased production of electronic markers.

Most high-end companies were less affected

However, for those companies that continued to make the electronic markers, the competition would only rise. Some of the remaining top-quality companies included Luxe Paintball, Planet Express, DYE, and many others.

Founded in 1994, DYE is one of the oldest companies in the sport. It manufactures a wide range of paintball equipment, as well as the popular Dye Rize line of markers. The goal of the company was to deliver reliable and dependable paintball guns and gear to all players.

A small England-originated company known as Planet Express became popular after creating what they called the Eblade board. This was a complete chip kit with the ability to convert any typical auto-cocker marker into an electronic one.

Today the company is now a leading manufacturer in electronic paintball markers such as the CS2 and the Etha 2.

DLX Technologies, also known as Luxe Paintball, amazed the world with its exclusive Luxe ICE, one of the best high-end paintball markers on the market. DLX designed its marker to be as customizable as possible and continuously updates to meet the demands of the players.

The Game of Paintball Today 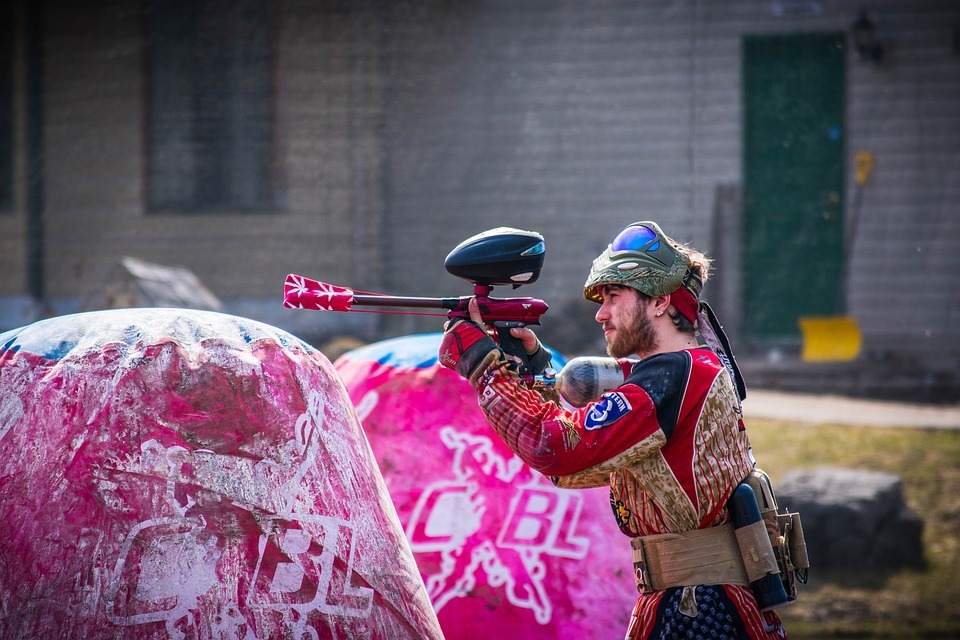 So now that we've answered your question of "When was paintball invented," let's go over the facts one last time before you head out into the field!

The very first game of paintball occurred in 1981.

When the game was first played, it was merely 12 friends trying to test who had the best survival skills only to become a world-known official sport in a matter of 2 years later.

Paintball has grown over the years, from outdoor and indoor fields to elaborate obstacles including custom scenarios and tactical gameplay. It has evolved into a highly competitive sport that comes in many different forms, ranging from small groups of friends to professional tournaments.

The game is now getting the attention it deserves and is a favorite recreational past-time for many people.

Did you enjoy learning about the history of this exciting, adrenaline-driven sport? Please let us know what you think in the comments below!