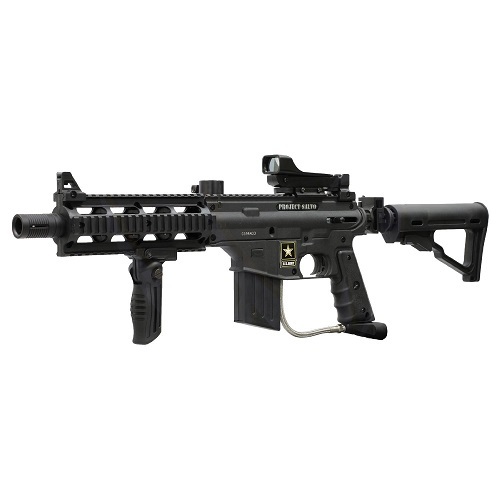 The Tippmann US Army Project Salvo is one of the more affordable paintball guns on the market. It costs between $149 and $170. This marker is basically a Tippmann 98 Custom. Tippmann has invested over a decade’s worth of time, effort and money refining the 98’s design. Those who are familiar with Tippmann paintball markers will testify to the 98’s reliability and its proven design.

While many argue that this marker was designed strictly for military simulation fanatics and those who desire to engage in firearms training simulations, the average paintballer should not be ruled out of consideration. This US Army licensed product is more than merely a gun for military geeks. It looks cool, it is fun to play with and it is extremely cheap. There is no doubt that the marker has some mass appeal, albeit a bit limited in scope. Let’s take a closer look at what differentiates the Tippmann US Army Project Salvo from the 98 and other markers.

The Tippmann US Army Project Salvo is built with a standard 11 inch anodized quick thread barrel, rails, shroud and stock. It is a .68 caliber marker that can be paired with the typical paintballs that are available at local stores. Yet many of those who have played with the Tippmann US Army Project Salvo advise others to use high quality paintballs as the lower to mid-end balls can compromise the marker’s firing mechanism. This mechanism is a semi-automatic open bolt blow back style system that operates on CO2, nitrogen or highly pressurized air.

The marker has a cycle rate of 8 paintballs per second. The front shroud has 4 picatinny rails along with a built-in sling mount to facilitate the attachment of accessories. There is also an aluminum die cast receiver, a stainless steel gas line and a high quality in-line bolt system.

The marker shoots like most others in its price range except it is relatively quiet. Some players have mentioned that there is a bit of a left hand pull that has to be compensated for. The marker can be used in military simulations involving team tactics or, alternatively, by the average woodsball player. However, it has a low fire rate and a fairly burdensome weight so it should not be used by those who play speedball.

Tippmann claims that the marker’s range is over 150 feet. Yet those who have used the gun are adamant that this is an exaggeration. The truth is that range depends on a number of variable including the player’s skill level, the air pressure used and weather conditions.

Numerous upgrades are available. Many opt to upgrade with the eGrip. Some shell out $60 for a Cyclone hopper to replace the disappointing standard gravity fed hopper. Others choose to upgrade with their unique choice of electronic hopper. Players often add sights, foregrips (like the Alpha Black E-Grip), tactical flashlights, bipods and tripods. You can also upgrade the barrel to something like a 14 inch J&J ceramic barrel. It is important to note that some players have complained that the barrel shroud impedes a number of barrel replacements and other modifications.

Pros of the Tippmann US Army Project Salvo

Aside from its rock solid reliability, the marker is widely lauded for its dexterity. It is multi-positional and has a standard folding stock. When measured from the breach, the stock is capable of collapsing down to just over 11 inches. It can expand to a little over 14 inches. When completely folded down, only and inch and a half emerges from the breach.

Those who use the Tippmann US Army Project Salvo tend to rave over its look. It is created in the mold of a US Army AR15 firearm. It looks just as good, if not better, than most of the customized milsim markers used at paintball fields around the world.

Players also love the marker’s feel. It weighs nearly 9 pounds when loaded with paintballs, but it still feels comfortable in the player’s hands. It rests nicely against your shoulder when you lift it for a carefully aimed shot.

Cons of the Tippmann US Army Project Salvo

It Is Far from Lightweight

As mentioned above, the marker is fairly heavy, coming in at about 8 and a half pounds when loaded up with paintballs. This is an issue for players of diminutive stature, especially youngsters and some women. Those who play extensive matches or play on back to back days often opt to connect the Tippmann US Army Project Salvo to a sling for shoulder, arm and hand relief. Yet it should be noted ballers can reduce the marker’s weight without compromising its functionality by removing some of its unnecessary parts and/or upgrades that have been tacked on by the player.

Plenty of players are not content with the marker’s standard gravity fed hopper. Experienced paintballers agree that this style of hopper often causes what is known as the “shaking technique” during the midst of battle. Yet the problem is ameliorated with the use of a Cyclone hopper.

Some players have complained that the Tippmann US Army Project Salvo is fairly difficult to disassemble. While this is not a universally held opinion, many players have aired their qualms with the gun’s design. This is actually a common complaint amongst those who are loyal to the Tippmann 98 product line. These markers tend to break down quickly and they are a pain to reassemble as the internal components are subjected to an egregious amount of pressure.

Be careful when you disassemble the marker as the slightest move in the wrong direction can cause parts to fly everywhere. Don’t even try to take the gun apart while you are in the field. Work on it at home with the marker’s maintenance pack easily accessible. It includes a spare tank o-ring, an approved barrel sleeve, a cleaning cable and an Allen wrench set.

Is the Tippmann Project Salvo a fully automatic paintball gun?

No, its a semi-automatic paintball gun that is compatible with both CO2 and HPA accessories, providing flexibility and versatility for a variety of applications. Related to this fact is that the feeder elbow of the Tippmann Salvo gun is designed for quick release, providing fast and simple maintenance.

What caliber is the Tippmann Project Salvo?

It’s a 68 caliber paintball gun that provides a ton of stopping power and flexible yet steady aiming.

How do you increase velocity on Tippmann 98 Custom?

Slightly related to Project Salvo, the 98 Custom from Tippmann is more of an SMG-like paintball weapon rather than a sniper. However, many people prefer to use both of these in some sort of a combination, so we felt the need to answer this question here as well. To adjust the velocity down, turn the adjustment screw inward or clockwise. You can find the adjustment screw on left side receiver at a 45-degree angle. From there, things are rather simple.

Final Thoughts on the Tippmann US Army Project Salvo

Despite its flaws and drawbacks, the Tippmann US Army Project Salvo remains one of the top choices when it comes to paintball guns. This is especially true for those of you who want to snipe rather than tackle your enemies upfront. Although heavy, it does a good job at shooting the paintball exactly where you point it at, especially if you configure its velocity and trajectory as you intend to use it.

Furthermore, the multi-positioning and the standard folding stock turn this beast of a paintball sniper into a truly accurate home defense weapon as well, if it ever comes to that. Obviously, it’s non-lethal, but it is as efficient as a weapon of this type can get.