What Is the Effective Range of Sniper Paintball Guns? 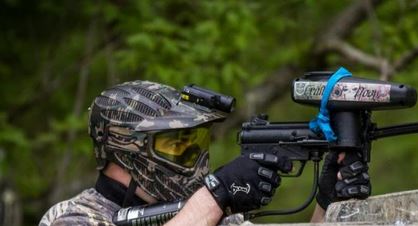 Sniper paintball guns allow you to play safely from a long distance. They give you precision and accuracy while allowing you to hide and shoot from long distances.

A good sniper paintball marker can be a game-changer. Some people argue that paintballs can’t fly straight. This implies that snipers make no sense and offer no value to the game. However, that’s an urban legend! A good player with the right equipment can make the paintballs fly straight, snatching victory from the jaws of defeat.

So, how far can sniper paintball markers shoot? What’s the effective range of these guns? This factor varies based on the combination of the range of the specific gun and paintball velocity.

Most people believe that the goal of a paintball goal is to eliminate your opponent as soon as possible. However, expert snipers know that making their opponents move or retreat to safety can be very effective in an overall game-winning strategy.

Sniper paintball guns help achieve both of these goals. These markers are loaded with the latest and greatest upgrades and modes. Things like scopes and integrated rail systems allow customization and more. All of these features make them look and feel realistic as well as perform great.

How far a paintball goes depends on the velocity of the ball. Paintballs must be hard enough so that they can fly freely. Those balls that break in mid-air are of poor quality. At the same time, they must be fragile enough that they break when they hit the target.

Every gun has a fixed trajectory that allows paintballs to stain the opponent even if shot from a very long distance. Balls will slow down at the endpoint of the trajectory without breaking even if they hit their target. You can notice so many unbroken paintballs in the game field. Therefore, a quality gun is going to allow its owner to take down enemies without getting too close.

Let’s talk about a few top models of sniper paintball guns with effective range. Each of them is equipped with the right components to act as the ideal wingman in the field.

If you’re looking for an affordable paintball gun that allows amazing speed from a long distance, the Tippmann A-5 Paintball Sniper

marker makes a great choice for you. The gun features a 16” barrel, an easily-adjustable stock, and a red dot as a bonus.

It’s outfitted with a patented Cyclone Feed System to link the feeder sprocket to the air mechanism. The feed rate is 17 balls per second. On top of that, it has a versatile frame that can be stripped and reassembled in 60 seconds.

Its all-aluminum die-cast body and extra-sturdy black finish make it the toughest and high-end marker available in the market. The A-5 also features a shock-absorbing cap, a front cocking knob, and a 200-round stock hopper enhancing performance and security.

The gun is 100% compatible with compressed air and nitrogen, whichever you prefer. You can customize it the way you want for better performance. We also selected this Tippmann model as your probably best paintball sniper rifle.

The Project Salvo Paintball sniper is an officially licensed product of the US Army. It is well made, looks great, and shoots well. It makes a low-priced alternative to expensive paintball markers. At the same time, it offers the same amazing looks, performance, and reliability.

You can easily strip it for quick cleaning and maintenance in the field. This semi-auto paintball marker was enhanced with standard EKO Valve technology granting it the best air source efficiency. When it comes to its effective range, this incredible marker delivers an average of 1600 shots per 20 oz CO2 tank.

By comparison, the standard 800 shots from common markers don’t use this technology. Besides being super easy to maintain and incredibly sniper friendly, the gun also makes an environment-friendly marker thanks to its Eko Valve technology.

This is one of the best and cheapest guns designed specifically for sniping. It is made from polymer for its light but solid and reliable construction. The ergonomic design allows a comfortable and secure grip till the end of the game.

This is another inexpensive marker that Tippmann offers to paintball enthusiasts. It uses patented technology for creating a backspin. This allows you to shoot level and precise shots from a long distance.

The Tippmann Flatline Barrel is known for its long-range. The gun is designed for expert snipers. With this gun, you don’t need to keep your arch short. If you love to play games involving shooting your opponents from long ranges, this is the gun for you. It also has a 90-day warranty which is an added bonus!

The effective range of a paintball gun depends on the paint and what your opponents are wearing (softer clothing does stop paintballs from breaking) but is usually around 80-100 feet. Paintball snipers, of course, can probably go more than that, but, again, it all depends on numerous factors such as clothing, weather, and so forth. Keep in mind that a paintball isn’t as versatile or as heavy as a bullet, so if the wind is too strong, it might get taken off track by a huge gush of wind when firing from far away.

What paintball guns do the military use?

Both stateside and overseas, the U.S. Army has utilized Tippmann paintball guns to train soldiers for combat. Paintball USA offers .68 & .50 caliber Tippmann rentals and the Alpha Black that resembles an M-16. And there’s a good reason for that. Tippmann is a true American brand, so it makes sense that the U.S. military would opt for a pure American paintball gun for their training.

Can you use a paintball gun for self-defense?

Yes, you can. Paintball markers are non-lethal and are very effective at deterring thieves and other types of criminals who want to harm you. However, you might have problems with the way you are required to carry a paintball gun in certain jurisdictions. We’re not a law firm nor do we pretend to offer legal advice, so it’s up to you to figure out what the laws are where you live or where you’re going to travel. However, in purely practical terms, paintball guns are some of the best self-defense methods out there.

Does paintball ruin your clothes?

The paintball fill will not permanently stain your clothes, but depending on the velocity of the paintball itself, it might shatter certain materials.

When buying a paintball marker, the general recommendation points at accuracy over style or price tag. Your ideal paintball sniper rifle should offer you precision, generous shooting distance, comfort, and handling. If you’re looking for a deal, getting a package gun with other supplies is often cheaper.