Piranha Paintball Gun Review: A Reliable Gun for Every Shot 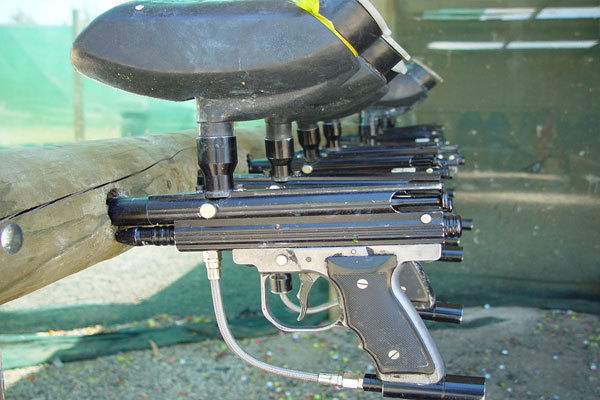 If you’re searching for a Piranha paintball gun review, it’s probably because you’re looking for a good paintball gun for beginners. Maybe you’d like to give paintball a try, but you don’t quite feel ready for a Tippman just yet.

Piranha is known for making paintball guns that are quite a bit cheaper than some of the higher-end brands on the market.

But of course, we all know you get what you pay for. Can Piranha stand toe to toe with some of the bigger paintball brands? Or do they fail to meet expectations? And who exactly is Piranha as a brand anyway?

What Is the Piranha Paintball Gun?

Piranha is a brand that’s been making paintball guns since 1981. They’re well-known for making affordable alternatives to some of the more expensive guns you’ll find on the market. Almost every Piranha paintball gun review you read will agree that these are among the best paintball guns you can find in this price range.

Along with their affordability, they’re also highly upgradeable. You can easily add sights, barrels, grips, and whatever else you need to suit your play style. Additionally, these guns can run on either CO2 or high-pressure air.

Piranha has a few different models to choose from. These include the Pirhana R6, the Piranha Enforce EXT, and the ever-popular Piranha GTI.

In truth, all of these models are very similar outside of a few minor upgrades and variations. One thing they all have in common is their reliability. For the most part, you can trust these guns to do exactly what you want them to do.

Please note that these products are currently unavailable on Amazon. Alternatively, you can find the Piranha R6, the Piranha Enforce EXT, and Piranha GTI on eBay.

What Else Do You Need to Know in a Piranha Paintball Gun Review?

Obviously, there are a few other things you need to know in a Piranha paintball gun review. Here are some other useful facts that will help you make a decision.

How well does it perform?

Of course, this is what you really want to know. In terms of performance, Piranha gets the job done. It has decent range and accuracy. The rate of fire isn’t bad either. In general, you can get 15 to 20 shots in about 5 seconds. You can expect a Piranha paintball gun to be very lightweight and durable as well. Overall, it’s a very dependable gun.

The most common word you’ll see in any Piranha paintball gun review is “average.” It’s a very solid product that does what you need it to do. However, it doesn’t necessarily excel in any particular area. Overall, this is its one major downfall.

Does it require a lot of maintenance?

A Piranha paintball gun doesn’t require too much maintenance to use.

In fact, it’s pretty easy. Cleaning it is a very simple task, and it doesn’t need too much oil either. A person could easily access every component of the gun in less than five minutes. Nearly every Piranha paintball gun review we researched mentions how easy it is to maintain.

However, there is one big drawback. Many reviewers report this gun chewing through O-rings. More than likely, you’ll have to replace them on a fairly regular basis. You might also have to oil the O-rings after each game to prevent them from scratching the inside of the gun. In terms of maintenance, this is its only real flaw.

Is this gun appropriate for all skill levels?

This gun can be used by virtually anyone, regardless of their skill level. That said, almost every Piranha paintball gun review will agree that it’s best suited for beginners.

It’s a very basic gun that doesn’t require a ton of maintenance. That makes it a good place to start for new paintball players. It’s also very affordable compared to most of the top paintball guns on the market.

But once again, Piranha doesn’t shine in any particular area. Because of this, more experienced paintball enthusiasts might want to look elsewhere. That being said, there are still many intermediate to advanced paintballers who were perfectly happy with this gun.

What do its customers think?

Most customers were very happy with these guns. In fact, nearly every Piranha paintball gun review mentioned that these are excellent products for the price. Almost everyone agrees that these are some of the best paintball guns you can find for this price.

More specifically, customers loved how lightweight and durable they are. It’s often described as a reliable gun that’s great for beginners.

Nonetheless, there were a few complaints. Several people had issues with the gun staying cocked. They often had to recock the gun in the middle of shooting. Some customers also dealt with technical issues on rare occasions.

That said, most customers were satisfied with their purchase. The Piranha GTI currently has 4.0 out of 5 stars on Amazon.

For these reviews, we used Amazon as our main source of information. The products’ official websites were also used when available. Also, our opinions were mostly informed by customer reviews from Amazon.

When reviewing these products, we chose to focus on a few different things. These include features, durability, ease of maintenance, accuracy, power, and rate of fire. Price was also a major factor in these reviews.

How Does It Compare to Other Paintball Guns?

Of course, no Piranha paintball gun review would be complete without looking at the competition. Let’s see how they measure up against some of the top paintball guns on the market.

The Tippman Cronus is among the most popular paintball guns in the world today. This gun is well-known for combining high durability with a MilSim body. It features an internal gas line and a high-impact composite body.

It also has a vertical grip, a ported barrel, and several Picatinny rails. That makes it simple to modify, and a person could easily customize it however they wish. On top of all this, the Mega Set also comes with an anti-fog paintball mask and 200 round gravity fed loader.

Unfortunately, a few people weren’t impressed with the CO2 tank. Several customers complained about it leaking. Others also said the mask that comes with it is uncomfortable. On top of that, the gun was a bit too heavy for some customers.

This gun does cost quite a bit more than the Piranha paintball gun. However, this is a case of getting what you pay for.

In this case, your decision will be based on your budget. Technically speaking, the Tippman Cronus is a better gun. But you have to ask yourself if you can really afford it. Customers gave this gun 4.3 out of 5 stars on Amazon. Please note that this gun is in low stock on Amazon, but it is available on eBay.

The Kingman Spyder Victor is another affordable alternative to some of the higher priced paintball guns out there. It uses an air-efficient EKO valve system that can shoot up to 1,500 shots from a 20-ounce CO2 tank. They claim this is the best air source efficiency on the paintball market today.

Many customers were pleasantly surprised by how good this gun is considering the price. Several of them described it as one of the best paintball guns for beginners. They loved how light it is, and they said it’s deceptively fast and powerful.

However, there is one very big complaint about this gun. Lots of customers had problems with the screws coming loose. Of course, this naturally leads to the rest of the gun falling apart. More than a few people had this happen the very first time they tried to use it.

The Kingman Spyder Victor is more or less comparable to a Piranha paintball gun in terms of price. It might even be a little cheaper.

Unfortunately, this gun simply doesn’t have the same level of quality. Even if you’re a beginner that wants to save some cash, you’re better off sticking with a Piranha. The Kingman Spyder Victor has 3.6 out of 5 stars on Amazon.

The Empire Mini GS is an updated version of the excellent Empire Mini. It only requires two hex wrenches for all the screws, which makes it very easy to put together. This gun also features a pressure-controlled poppet engine and integrated break-beam anti-chop eyes.

Additionally, you can choose between multiple firing modes, including PSP and MILL. Other features include a wrap-around foregrip, a venting ASA regulator with an on/off switch, and a micro-honed, ported aluminum barrel.

Most customers were very happy with this gun. In particular, they loved how small and lightweight it is. It’s an especially appropriate gun for people with smaller hands. Customers also appreciated how fast and powerful it is.

Complaints were few and far between. However, some people did have trouble with it leaking air from the solenoid. Also, some customers said they received defective products that stopped working within a very short amount of time.

While this is a very good gun, it’s also much more expensive than a Piranha paintball gun. You’ll be spending some serious cash with this one.

Once again, price will be the main deciding factor. The Empire Mini GS Marker is a great paintball gun, but many people simply won’t be able to afford it. By contrast, the Piranha paintball gun is much cheaper and a better choice for beginners. It has 4.4 out of 5 stars on Amazon. Again, this item is in low stock on Amazon. You can find it on eBay instead.

The Tippman 98 Custom Ultra Basic is another excellent paintball gun from Tippman. This gun is a semi-automatic marker. One thing that makes it stand out is how easy it is to upgrade. It features a Picatinny rail on the top that makes it easy to add a scope or a carry handle.

It also has a split receiver design that allows you to access its internal components for further customization. On top of all this, it features anti-chop technology that helps prevent paint breakage.

Customers loved how easy it is to customize this gun. They also thought it was a great all-around product in general. Many described it as fast, powerful, and accurate. Overall, it’s very reliable.

The only major problem is its durability. Several customers had problems with it breaking while they were using it. That isn’t something you want to happen after spending this much money.

Speaking of price, the Tippman 98 Custom is, once again, quite a bit more expensive than a Piranha paintball gun. By now, you see where this is going.

The Tippman 98 Custom is a good choice if you want something you can easily customize. But if you want a good gun without spending a lot of money, stick with a Piranha paintball gun instead. This gun has 3.3 out of 5 stars on Amazon.

Is Piranha the Paintball Gun for You?

Now that you’ve read this Piranha paintball gun review, you have an idea of what to expect from this brand. Piranha makes good guns that are very affordable.

In fact, one could say these are some of the best paintball guns you’ll find in this price range. They’re accurate, they’re lightweight, and they’re easy to maintain.

That said, there’s nothing especially spectacular about these guns. In truth, you might consider getting something that’s higher quality if you can afford it.

But if you’re a beginner that’s looking for a good gun to introduce you to the sport of paintball, then a Piranha paintball might be exactly what you need.

What kind of paintball gun do you use during your game? Have you consulted another Piranha paintball gun review that led to different results? Let us know in the comments!