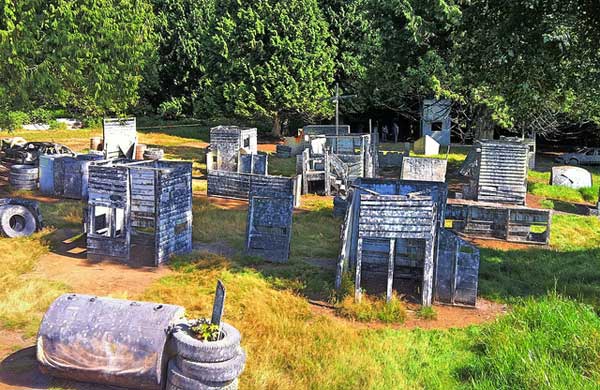 Paintball is an increasingly popular sport with numerous variations. Whether playing solo or as part of a team, the game relies heavily upon strategy. Military-style tactics are a necessity in the field, but even beginners may play successfully with little or no prior training. By keeping some basic rules and tactics in mind, you will live longer on the field and have a more enjoyable game.

Some of the most important paintball tips for any new player are in regards to safety and fair play. These rules make for a fun game and help to build a positive reputation amongst other paintballers. Please note that while following these will not improve your gameplay, they will make it more likely that advanced players will be open to having you on the field.

Paintball is a mostly painless sport, but there is some danger involved. Paintballs travel at speeds as fast as 280 miles per hour, making them capable of more than a quick sting if safety precautions aren’t observed. These simple paintball tips will help you have a safer game.

Sportsmanship is always important. In paintball, fair play can determine not only who you play with, it may also affect where you may go. By following a few simple rules, you will enjoy more options and offers to play.

When playing solo or as part of a free-for-all (FFA) match, it is important to consider three keywords: Cover, Mobility, and Confidence. These three simple terms encompass the bulk of single player tactics and are also crucial during team play. During your first several games, these keywords will help you live longer and have a more enjoyable game without any additional tactical knowledge.

Whether it is a tree, bush fort, or ditch, staying behind cover is the easiest way to avoid getting hit. Try to avoid obvious or minimal cover and plan your movements to allow you to move quickly from one shelter to the next. Avoiding large open spaces means your opponents must work that much harder to make their kill.

While taking cover is important, so is staying mobile. Remaining in one place too long will allow your opponents to zero in on your position and possibly flank you. Even when in a fortress, you should continue moving around, making sure to lay down fire against any approaching enemies on all sides. It is also often advantageous to charge from your cover firing at all visible enemies. They will be more likely to dodge than to take accurate shots. This will also prevent them from cornering you when storming your fortress.

This is the two-edged sword of paintball. Not having enough confidence will lead to panic maneuvers that get you killed. Likewise, overconfidence may lead to exposing yourself. Paintball may be a fast and active sport, but it is still a game of strategy, not luck. Always check your flank for possible danger, and avoid making rash decisions if there is a moment to consider your options.

Playing as part of a team requires cooperation and good communication skills. Depending upon the type of game and your team’s strategy, you may find yourself making some decisions or adhering to a set plan. Before starting the game, it is best to get to know your teammates and the team leader.

There are two major styles of play in which your team is split into two squads. The first method sends one squad out while the other lays down heavy cover fire. This allows your team to gain ground quickly at the cost of coordination. The advance party must function with little or no communication and risk being caught in a crossfire.

A second style is a traditional leapfrog tactic. One squad pushes forward while the other lays cover fire. Once the first squad has secured a position, they create cover ire for the second squad to push ahead of the new position. This method allows or a stronger push at the cost of speed and requires good communication with squad leaders.

Team Free for All (FFA) Tactics

Some variations of the game require teams to act independently. In these games, you must achieve the team’s objective with little or no direct communication with your teammates. It is most important to avoid friendly fire, which is a higher risk if you aren’t aware of your team’s positions. This type of game most commonly relies on a “last team standing” or objective-oriented style of gameplay, so discussion prior to the beginning of the game is an excellent way to plan out an overall team strategy.

The concept of paintball is simple, but allows for endless variations in gameplay. Different games have unique rules and sometimes have equipment limitations. It is always best to ask about the game before starting so that you will be able to formulate a basic strategy. The following are some common variations and basic tips on how to survive them.

This variation off free-for-all may prove both fun and challenging for beginners. The rules are simple: You have only one target and only one other player has you or a target. The trick is that nobody knows the target any other player has been assigned. To survive this game, treat every other player as hostile. When your target player has been eliminated, you will receive their target card. Be wary and focus your efforts upon finding the target you have been assigned as quickly as possible. The game ends when there is only one player remaining, although the win generally goes to whomever has the most cards in their possession, not the survivor. Thus it is not in your best interest to remain concealed until most players have been eliminated.

Perhaps the most common paintball game, your team’s goal is to retrieve the enemy’s flag and bring it back to your base. The flags are in a known location and cannot be hidden to prevent cheating. Rules variations allow for multiple lives (in which you must return to the starting point before rejoining the battle), and your team leader will usually separate the team into squads. Pay attention to your squad leader and the overall game plan for the best chance of victory.

These two games are similar variations of capture the flag with the notable exception of having only one centrally located flag. Center flag push has the added modification that the flag must be taken to the other team’s base. In both of these games, it is vital to have good communication with your teammates and follow all instructions from your squad leader.

This team game is a good starter due to its multiple win options. One team guards a target location while the other controls a package “bomb”. The main goal is to stop the bomb (or deliver it to the target location, if you are on the offensive team). The game also ends if one team has been eliminated. As a beginner, it may be easiest serve as a guard when on the defending team, as a stationary position will make it easier to stay alive while serving an important role. No matter which team you are on, pay attention to your team or squad leader, as both teams require good communication to achieve their objectives. Variations of this game include two-sided where both teams have a bomb, and neutral bomb, which is the essentially same as center flag push.

Comparable in popularity to capture the flag variations, team deathmatches are a form of free-for-all which may involve squads or overall team coordination. Players generally have a set number of lives and must return to the starting point each time they are killed before they may be killed again. When playing in a deathmatch, try to buddy up with one or two other teammates if you are not playing with squads. This gives you extra protection and your small group will be better able to take cover. Keep some communication with other teammates whenever you encounter one another and pay attention to any strategies laid out by your team or squad leaders.

This variation of deathmatch may be more difficult for beginners, but poses a good challenge for the adventurous. The predator team starts of with more players than the prey. As the game begins, the prey hide in the field, taking whatever shelter or tactical position they can. The predators then begin searching for the prey. The challenge in this game comes from being part of the prey team. Killing a predator removes them from the game. However, if you are prey and are shot, you become a predator.

There is generally little or no team coordination amongst the prey, as captured prey would then know how to locate other prey. Meanwhile, the predators may function independently or as a unit, making them more dangerous. If you are prey, treat the game as single-player and keep moving from one shelter to the next. Do not assume that a teammate is still on your side, or you may expose yourself to a predator unintentionally. As a predator, try to coordinate with other teammates to flank and capture prey.

In this team game, each side picks a VIP who is then dressed in bright colors. Your goal is to kill the other team’s VIP. There are no extra lives, and the game ends when one  the VIPs are killed. Note that the VI is often unarmed in this variation, so pay close attention to your team leader’s orders and work closely with your team or squad. As there are no extra lives in this game, try not to expose yourself to enemy fire unnecessarily.

Finally, some variations of the game may include optional rules for team medics. The medic is a player elected by your team who is skilled at dodging paintballs. Players will have a set number of “heals” before they are dead and remain on the ground where they are hit if they have heals remaining. It is the medic’s job to locate fallen comrades and heal them by touch. If the medic on either side is hit, they are dead and wounded players are eliminated. It is in your best interest in games that include a medic to protect your team’s medic while attempting to eliminate the other side’s medic as quickly as possible. Do not depend upon your medic when playing, or you may become overconfident and put yourself and the medic in danger.