How A Paintball Gun Works: Our Complete Guide

There's a lot to love about paintball -- it's an enjoyable, action-packed game, not to mention great exercise. Getting to fire a paintball gun is a lot of fun as well. But have you ever wondered how a paintball gun works?

Paintball guns don't work the same way real guns do. Of course, considering that you're probably shooting paintball guns at your friends, this is a good thing. It's also a different mechanism that's quite fun to learn about.

Nothing's better than that great, tired feeling you have after a long, fun day of playing paintball. It might be even better, though, if you get to shoot that gun knowing how a paintball gun works.

The Parts of a Paintball Gun

If you've ever looked for a paintball gun, you know that they have all sorts of different features. They can vary widely when it comes to design. However, there are four basic parts that are universal to all paintball guns. These include the body, compressed air tank, barrel, and hopper.

Most of the functions, as well as aesthetic features, are located in the body of the paintball gun. These include the main parts that are involved in the actual firing mechanism, which would be the trigger, valve, and bolt.

The majority of paintball gun bodies are made of aluminum. Manufacturers do this in order to make paintball guns lightweight for the players.

There are many useful features in the body of the gun. One is the safety switch, which is very important because you use it to prevent the gun from firing when you're not playing. There is also the trigger, which initiates the firing sequence of the paintball.

The body also contains the cocking knob, which is what pulls back to cock the gun for a new round. There is also the Venturi bolt, which fires the paintball from the barrel.

The firing chamber is where paintballs go from the hopper when they are ready to blast out of the gun.

As the name implies, the compressed air tank is the tank that holds whatever gas you're using to fire the paintballs. It's typically either carbon dioxide or high-pressure air, which is commonly known in the paintball world as HPA.

It's very important to inspect the tank for any defects before you screw it into the air source adapter. If there are any leaks, it could completely compromise the performance of your paintball gun.

People used to more commonly use carbon dioxide than HPA for paintball guns. However, that is no longer the case.

That makes it so that the pressure that propels the paintball out is inconsistent, leading to inconsistent accuracy when you're firing the gun.

Tanks can vary in size. However, the most popular size is 67 cubic inches. On average, you can make between 800 and 1,000 shots with this tank before you need to replace it.

The barrel is the part of the gun that directs where the paintball goes and controls the release of the pocket of air behind it. It's really important that you keep your barrel clean. If you aren't meticulous about keeping it clean, it could destroy the accuracy and reliability of your gun when you're firing it.

When you're looking at different barrels, bore size is one parameter that you should consider. It's the diameter of the barrel. Barrels come with several different bore sizes, which fit all sorts of different sized paintballs.

One important thing to keep in mind is that your barrel threading needs to match the threading of your marker. The most popular barrel threads are the following: Angel, Autococker, Spyder, Shocker, and Impulse/Ion, 98 Custom, and A-5.

Typically, though you won't have to worry about this, because when you buy a paintball gun, it's going to come with a barrel.

When you're a little more advanced in the game of paintball, you might want to upgrade your barrel. If you do this, you should consider both the length and the bore size.

When it comes to length, shorter barrels are more gas efficient because they don't require as much air for each shot. However, longer barrels are typically quieter, because the gas has more time to exit the barrel.

Most barrels are between 3 and 21 inches in length, with the optimal length being somewhere in between, depending on your preference.

You should also make sure that your gun has a well-made bore. The diameter of the bore needs to be the exact diameter of the paintballs you are going to be using. Otherwise, you'll have to deal with velocity disruptions and trouble with accuracy.

A lot of paintball players don't think about hoppers that much, but they're a very important part of how a paintball gun works. The hopper is where you load and reload paintballs into the gun. If you can't get them into the gun, you won't be able to play.

How a Paintball Gun Works 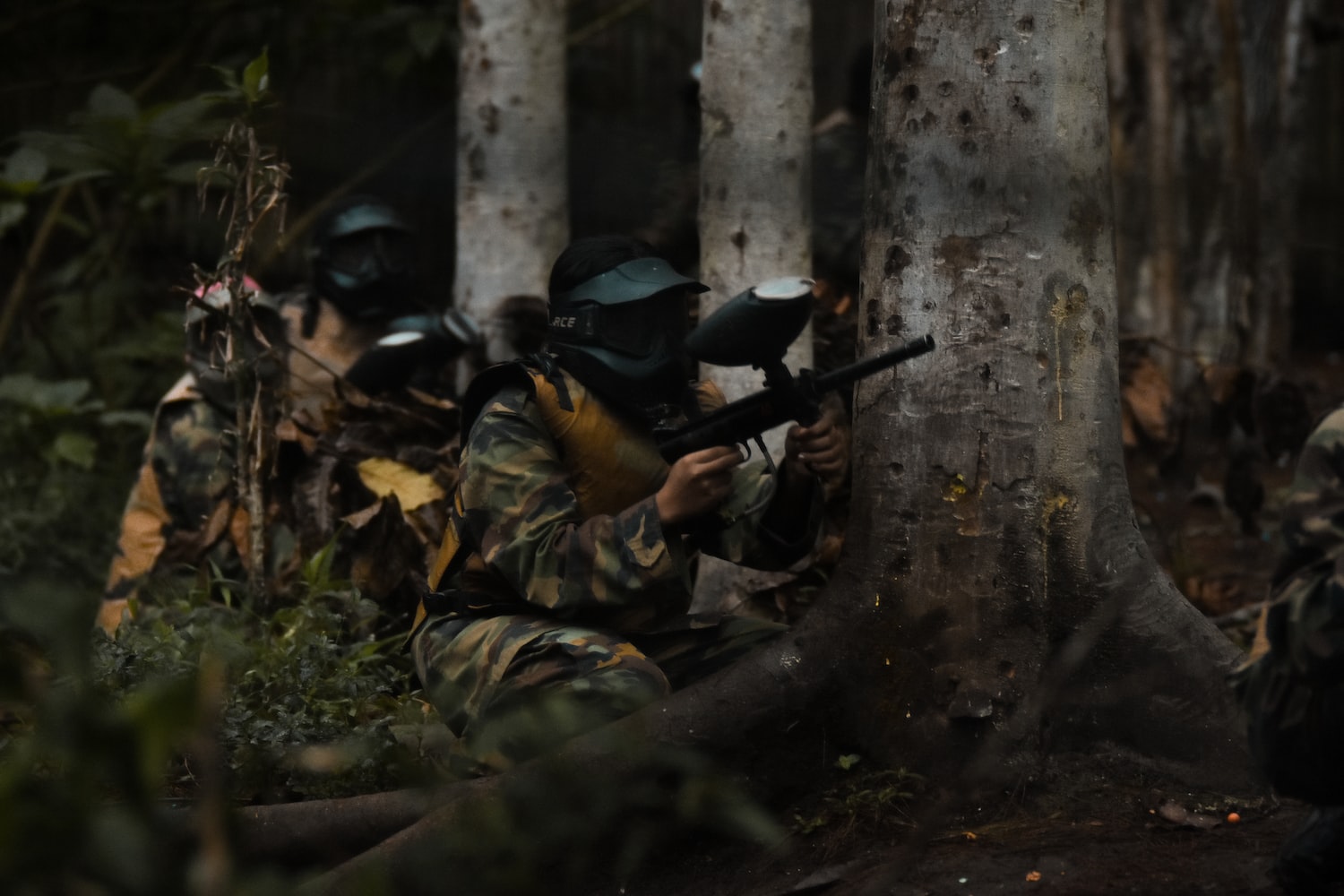 Every time you pull the trigger on your paintball gun, it causes the release of a burst of gas. This leads to the movement of a controlled valve that sends your paintball on its journey. In a nutshell, that's how a paintball gun works.

If you want to know how a paintball gun works, it's important to know that not every paintball gun is created the same. There are several different designs, and two main types: mechanical and electronic.

How a paintball gun works is fairly universal in some ways, but there are some fairly significant differences. That's particularly true when we're talking about mechanical vs. electronic paintball guns.

The majority of mechanical paintball guns are considered to be blowbacks. On these guns, when you pull the trigger, you end up releasing a bolt that is propelled forward by a spring.

In contrast to mechanical guns, electronic guns fire paintballs using battery-powered circuit boards. These activate solenoids that lead to the firing of the gun.

When you pull the trigger, the circuit board receives a signal to fire. You can program a circuit board, which makes it easy to set the gun up to fire automatically or fire in a variety of patterns.

In order to assure consistent firing, electronic guns rely on regulators. Regulators are mechanical devices that release air into the barrel at a constant pressure, despite possible variable air pressures within the tank.

The Shooting Process: The Journey of the Paintball 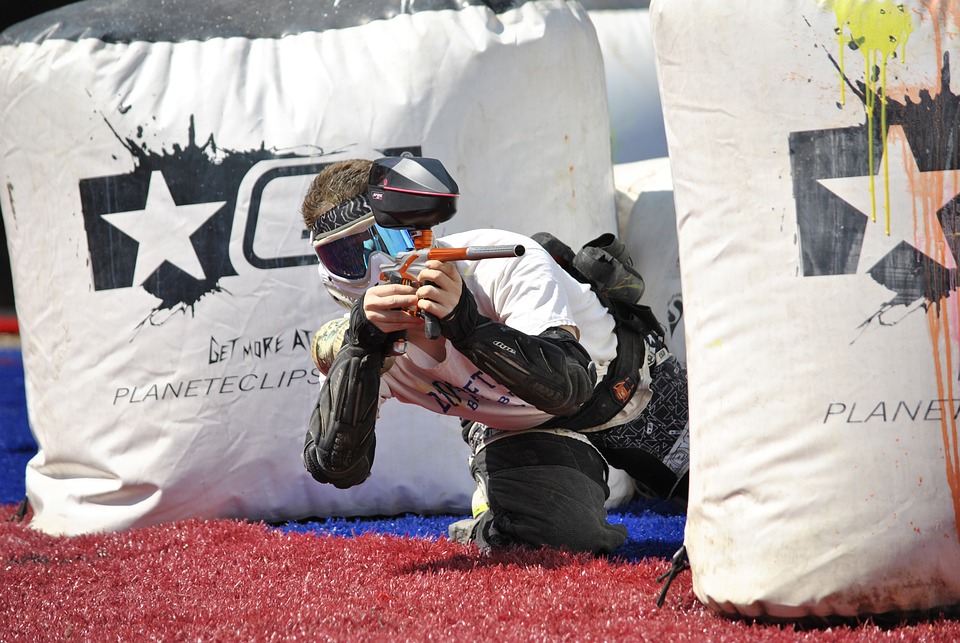 This is pretty self-explanatory. You pull the trigger, and it sets the entire process into motion.

Since the air in the tank of your paintball is in compressed form, it has to expand in order to do its job with the paintball. When you pull the trigger, you allow for the release of compressed air into the expansion chamber.

The rapid burst of air from the expansion chamber now pushes the firing pin forward. The firing pin is what comes into contact with the paintball, so this is a pretty pivotal step in terms of getting the paintball out of the gun.

Now, the firing pin will launch the ball through the barrel. That's where the paintball comes out.

​Even though the burst of air ultimately powers the motion, it's the firing pin that propels the paintball forward. The air indirectly provides the paintball with its forward momentum.

6. Setting up for the next round

Of course, the whole apparatus needs to be in place for you to shoot the next paintball. That means part of the burst of air which powered the trajectory of this paintball is used to prepare for the next one.

This portion of the air essentially re-cocks the firing pin. Now, the paintball gun is ready to shoot another paintball. 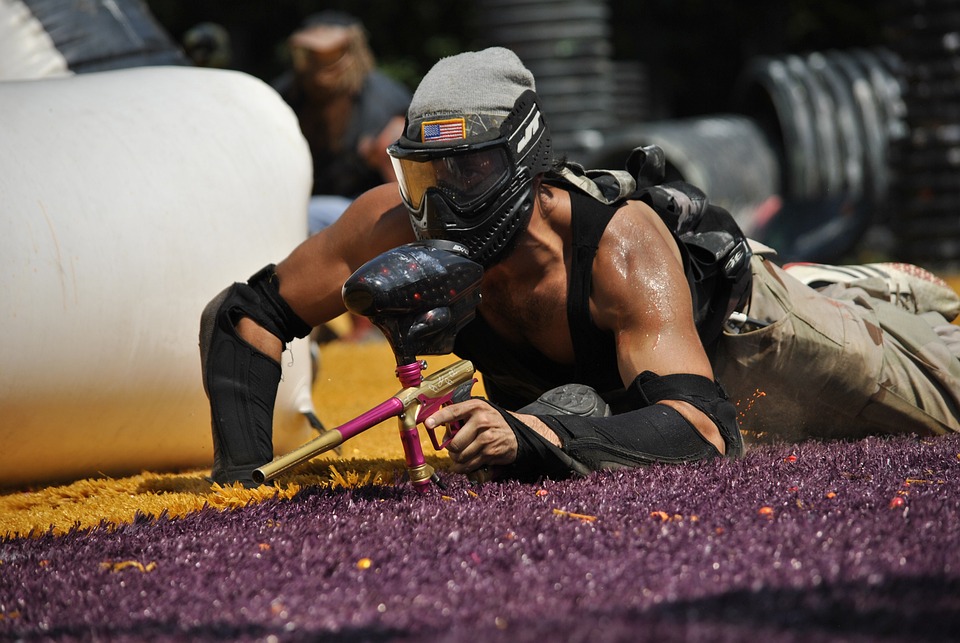 Since you want to have the best possible chance of winning, there are certain things you should know about how to maintain your paintball gun and the paintballs themselves.

It's hard to keep your paintball gun clean at all times. After all, when you're playing, it's inevitably going to get muddy and dirty. However, it's important that you clean it after every game, as a dirty paintball gun can really ruin your accuracy.

One thing you should do is run a squeegee through the barrel (and make sure the squeegee itself is clean). You should also clean the entire body, including the raceway inside your motor, detents, bolt and hammer, and eyes.

In addition, make sure you keep the hopper clean -- many don't think to do this, but the contents of the hopper are going into the barrel. So, you don't want to meticulously clean your barrel only to have it dirty because of the dirty hopper.

Make sure to buy the right size paintballs for your bore size. If they're too small, they'll bounce around and not have a smooth trajectory as they leave the barrel. If they're too big, there will be too much friction as the ball goes out, causing them to lose velocity or worse, break in the barrel.

For verification that your paintballs are the right size, there's a fairly straightforward test. Disconnect the barrel from the gun and drop a paintball through it.

If it falls straight through, it's too small. In the event that it gets stuck in the bore, blow through the barrel with a small burst of air. If it's still stuck, the paintballs are too big. But, if it goes through, they're likely the ideal size.

Also, before you load your hopper, make sure you inspect your paintballs. Many players don't do this, but even minor imperfections on paintballs can affect their trajectory. Also, if one happens to break inside your gun, it can ruin your entire game. 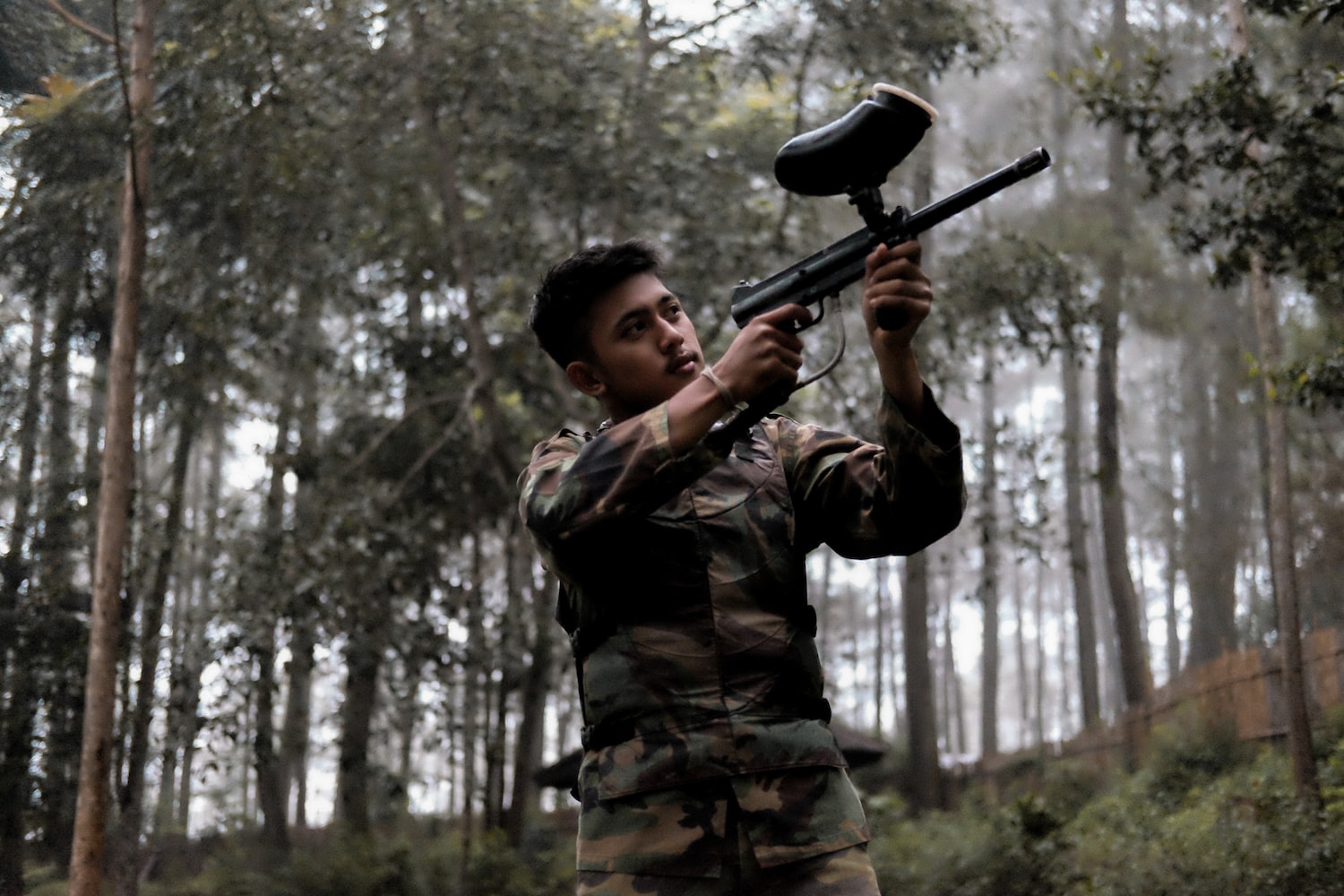 You're always excited to play paintball, but probably now more than ever. Now that you understand how a paintball gun works, it's probably going to be even more fun to fire it at your friends.

Whether you have a mechanical or electronic paintball gun, the fact that it's air driving the entire shooting process makes your gun all the more impressive.

Science is probably the last thing on your mind when you're playing paintball, but the truth is that there's a lot of physics and chemistry going into how a paintball gun works. You don't have to understand all of it, but you have to admit it is pretty cool. Especially since it can help you win your next paintball game!

What do you have to say about everything we've just told you about how a paintball gun works? Let us know in the comments section.