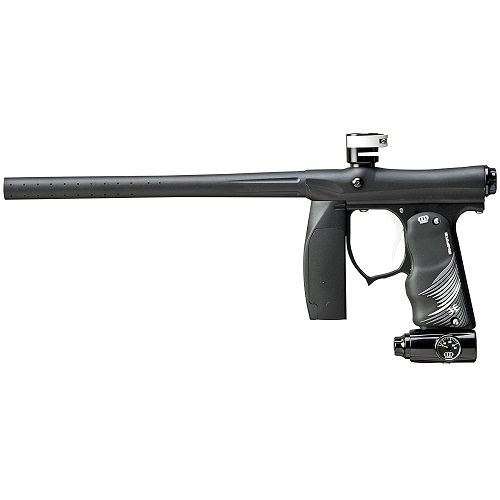 While the Empire Invert Mini is quite small, it overcomes its diminutive size with excellent shooting performance. This munchkin of a marker weighs slightly under two pounds when fully assembled. Despite this, it shoots with the authority and accuracy of a regular-sized marker. It has a middle-of-the-road price (around $300). Moreover, it is incredibly easy to handle, so it has quickly become quite the popular little marker.

For players who are concerned with the Invert Mini‘s durability, have no fear. This tiny gun comes with a limited lifetime warranty backed by industry stalwart Empire Paintball.

Therefore, you can go all in and play in your usual style without hesitation. While the Empire Invert Mini might be minuscule, there’s no reason to wear “kid gloves” when you use it. It’s ready for tournament competition, and it’ll do a darn good job.

The Invert Mini has an impressive 20 bps maximum firing rate. This is a nice surprise that most wouldn’t expect from a marker of its magnitude. It’ll blast away at competitors with speed and accuracy.

The marker has a three-point adjustable trigger, modes like Millenium, PSP, NXL, and NPPL, and an input pressure of around 200 pounds per square inch. Players will have to remove the foregrip cover to change modes. While this is a hassle, it doesn’t take too much time to complete.

When players squeeze the trigger for a shot, they will feel some vibration. This is to be expected from a marker the size of the Empire Invert Mini. Unfortunately, the vibration can be significant enough to loosen a screw or two in the marker’s foregrip from time to time.

The Invert Mini’s user experience design is unparalleled. Ballers will love the fact that the Invert Mini is “macro less.” This means that it requires no hoses for operation. Integration occurs through the marker’s grip. This makes the Invert Mini look extra sleek and unique. Few guns offer functionality without the use of hoses while most require two hands at all times with a steady hold.

The Empire Invert Mini is easily held in a single hand. It can be angled however the player desires to rattle off shots on the run while jumping in mid-air or while crawling on the ground. It is powered up with a single button that also functions as the marker’s safety.

The Invert Mini has a universal appeal that will strike the fancy of the most experienced players as well as those who are just starting out with the sport. It has that extra special cool factor that makes everyone want to give it a try.

There is no on/off ASA on the Invert Mini. Players must screw in the tank unless they buy an on/off ASA.  On the other hand, owners can simplify the process by completely emptying out the tank before taking it off of the marker.

Moving on, the Invert Mini maintenance is simple. The marker’s internal parts can be accessed by removing a single screw. Players will have to lube the bolt along with its guide from time to time. If the gun’s eyes got dirty, the player would have to remove them along with the foregrip, plate, and trigger frame. This takes about ten minutes or so. Nonetheless, it is worth the time and effort to maintain eye cleanliness.

The Potential for Upgrades

One of the few criticisms of the marker is that it was designed with fewer upgrades in mind than those you can find inexpensive paintball guns. A good amount of paintball players love to modify their markers with special customization.

The Empire Invert Mini only allows players to add a few extra niceties like certain triggers, feednecks, and barrels. Of particular note are the New Designz Thread Saver and the Lurker bolt. The bolt is recommended as it boosts shot accuracy and speed. The thread saver comes in handy in its own right, as it lets the player de-gas the gun without removing its tank.

How do you reset the Empire Invert Mini’s board?

According to the user manual, there are three ways in which you can reset the Empire Invert Mini’s board to its default factory settings. Here is how you can try:

Whichever one of these methods you’ll choose, you’ll end up with the same result. The board will be back to its original factory settings.

How do I turn the eyes off an Empire Invert Mini?

This passage was taken right from the user manual: “To turn the eyes off, ensure that there are no paintballs in the MINI breach or feed-neck, make sure the marker is switched off, and then while pulling and holding the trigger, turn the marker on. A quick double-blinking green LED will indicate that the eye system has been deactivated.”

Do you need to clean the Empire Invert Mini?

Yes, you especially need to clean the eyes, especially if you chop a ball or have a barrel break. If the eyes are dirty, the card will always think there’s a ball ready to be fired, which will make you break a lot of paintballs. Unless this kind of ordeal happens, then just go through your regular maintenance process. A regular q-tip will do the job, but you’ll need to disassemble the whole unit.

Which one would you recommend: the Empire Invert Mini or the Spyder Fenix paintball gun?

They both work great in all sorts of paintball scenarios. However, from my testing, I have come to the conclusion that the Spyder Fenix makes for an awesome paintball marker for beginners, whereas the Empire Invert Mini is a little more versatile. The Spyder Fenis is also considered to be somewhat more affordable, but you won’t break the bank even for the Empire Invert Mini.

The Invert Mini is ideal for players who want a light gun without a hose. Really, who wants to worry about a hose crimping or breaking right in the middle of a paintball tournament? The hose-free design along with its incredibly lightweight separate the Empire Invert Mini from its competitors.

This marker is perfect for anyone with medium to small-sized hands. Those with larger hands might find that the grips are placed too close to one another for comfort. Still, it is a solid marker for almost any paintball player.