5 Coolest Paintball Courses in the World 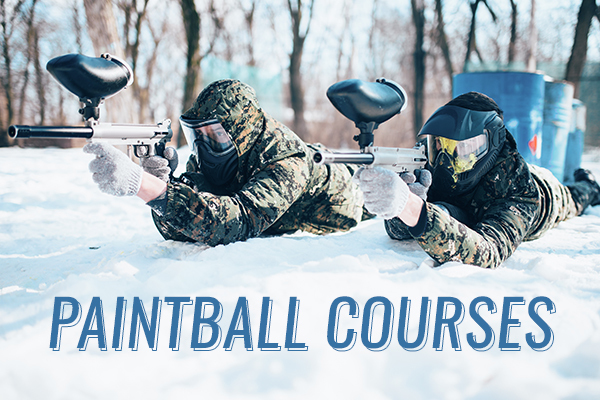 Originally developed for recreation, paintball has evolved into a formal sports competition, which involves tournaments and teams comprised of professional players.

Military forces and law enforcement use paintball as part of their training. Participants can play indoor or outdoor fields of varying sizes. Some of the games include elimination, capture the flag, defending/attacking a particular area, or capturing objects hidden in the playing area.

One of the best things about paintball is that you can be of any age or level to play. All you need is a team, gear, and a field.

We wanted to find out which terrains were the most interesting, so we scoured the globe for the coolest paintball courses.

When you enter Skirmish’s website home page, you get sucked into the world of paintball. The home page provides a bird’s eye view and a first-person point of view of the course.

Located in Albrightsville, USA, Skirmish is home to more than 50 paintball maps in the world. The entire course spans over 750 acres of the Pocono Mountain real estate. (1) 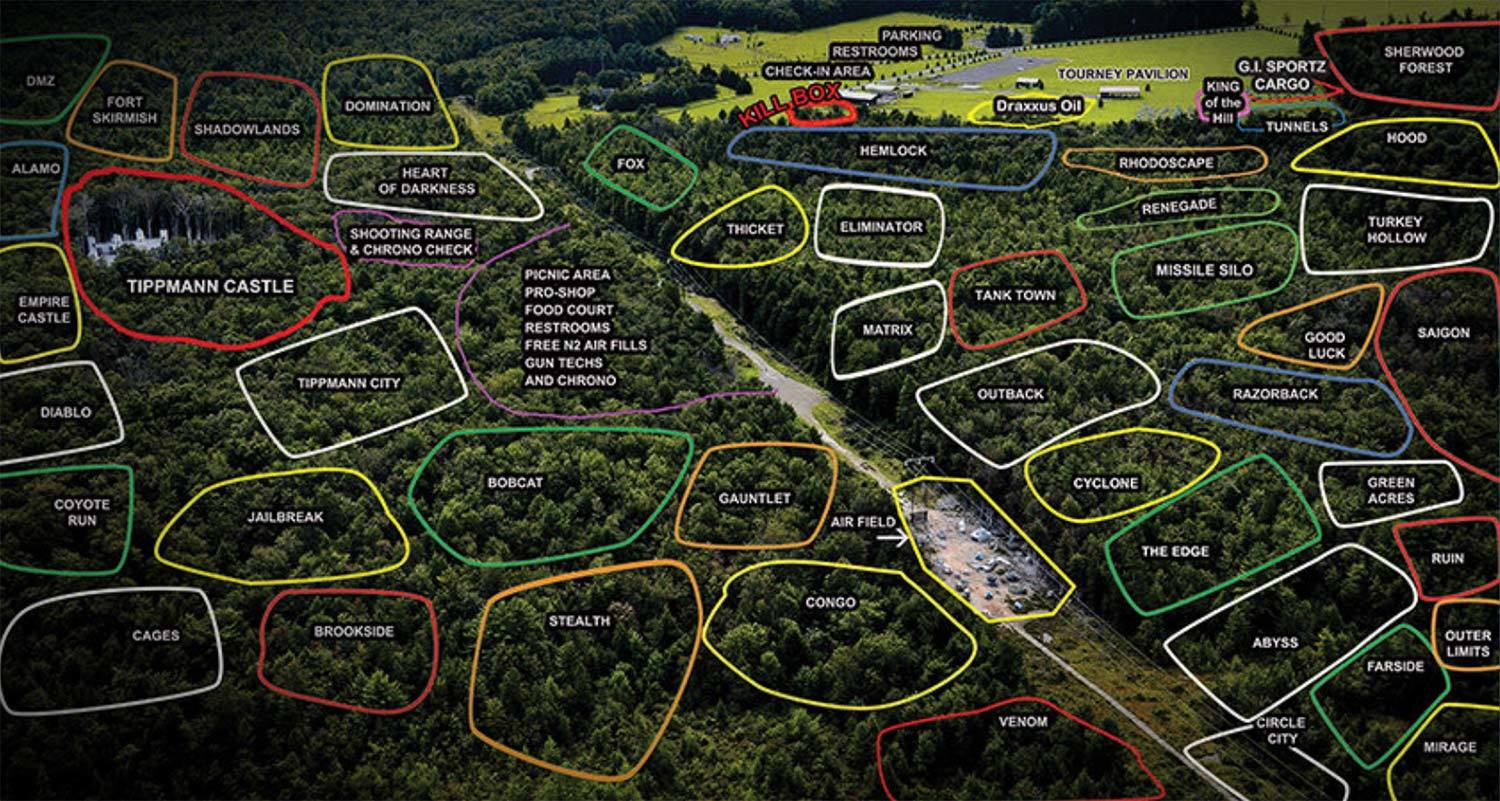 Paintballers who want a variety of courses will find Skirmish to be a delight, as it offers dense woods, open fields, swamps, bridges, creeks, two castles, cargo containers, airplanes, and inflatable bunkers. Talk about a variety.

Players don’t have to have paintball experience, and the staff offer tips and answer questions. Skirmish provides paintball equipment.

They provide numerous packages, depending on your needs and organize events that allow specials for students and benefits for other groups.

The company is based around the world in countries such as the UK, Ireland, Australia, and America. Skirmish USA hosts one of the most popular scenario games called the Invasion of Normandy.

Situated in Poland, Gotchaspielfeld Nord is Europe’s biggest paintball field. The facility, which opened in 2008 after a year of preparation, is located an hour and a half from Berlin and at the German border in Forst.

Aside from the usual amenities, the park offers a sleeping facility with 150 beds, a restaurant with a beer garden, an open-air cinema, and a disco. 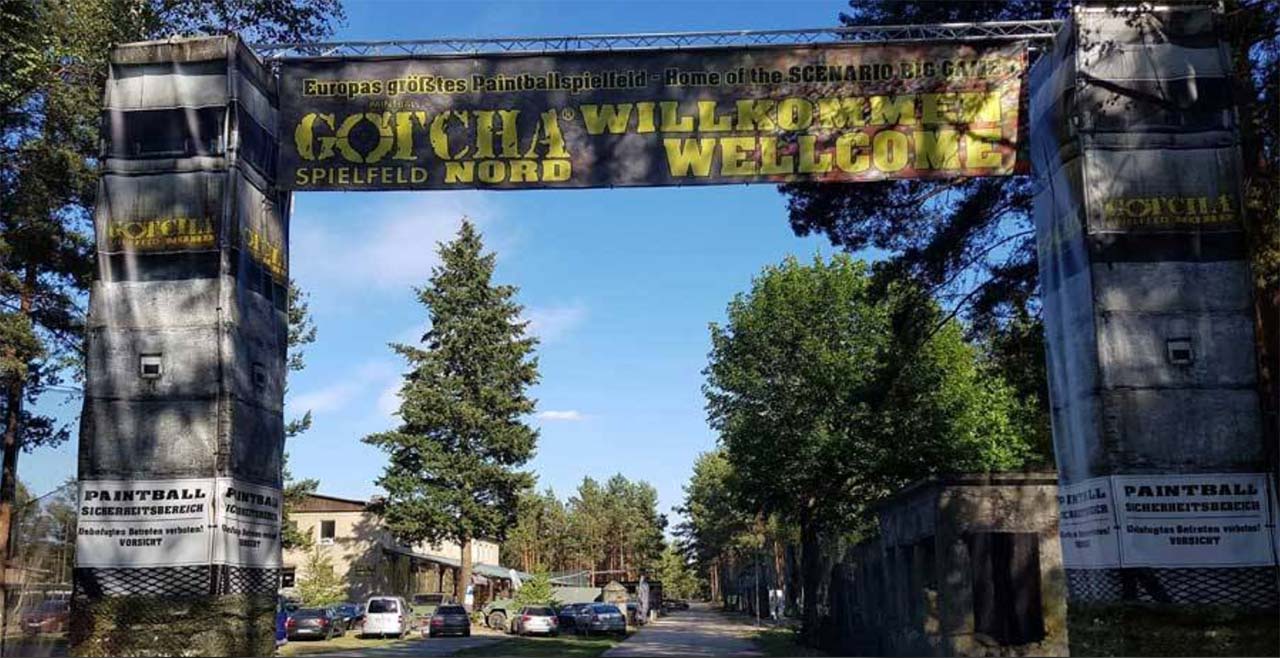 Those who are more interested in the paintball aspect of the park have the option of choosing from 20 fields spread over 81 acres. One of the most popular scenarios at Gotchaspielfeld Nord is the Big Game. More than 1,000 players from German and the rest of Europe gather to compete in the legendary event.

The other park’s offerings include a tour of the Secret Bunker Forest and a tank ride on one of the three original armored vehicles. (6)

Some of the themed fields that the park offers are the Black Hawk Down, Rocket SILO, Green Zone, Slim City and House of Paint.

One of the benefits of making a full-day booking is free lunch at the park’s restaurant, Kantina.

It seems that everything in Hollywood is about glitz and glamor. That seems to be the case even for their paintball courses.

One of the most interesting paintball courses is the Hollywood Sports course, based in Bellflower, USA.

Only Hollywood’s arts and culture can transport you to a battlefield, and the infamous park doesn’t fail to do that. This place has it all.

The venue is a million-dollar outdoor facility and spread over 28 acres. Situated to Los Angeles County in the city of Bellflower, Hollywood Sports Paintball offers various themed courses to create a memorable experience. (3) 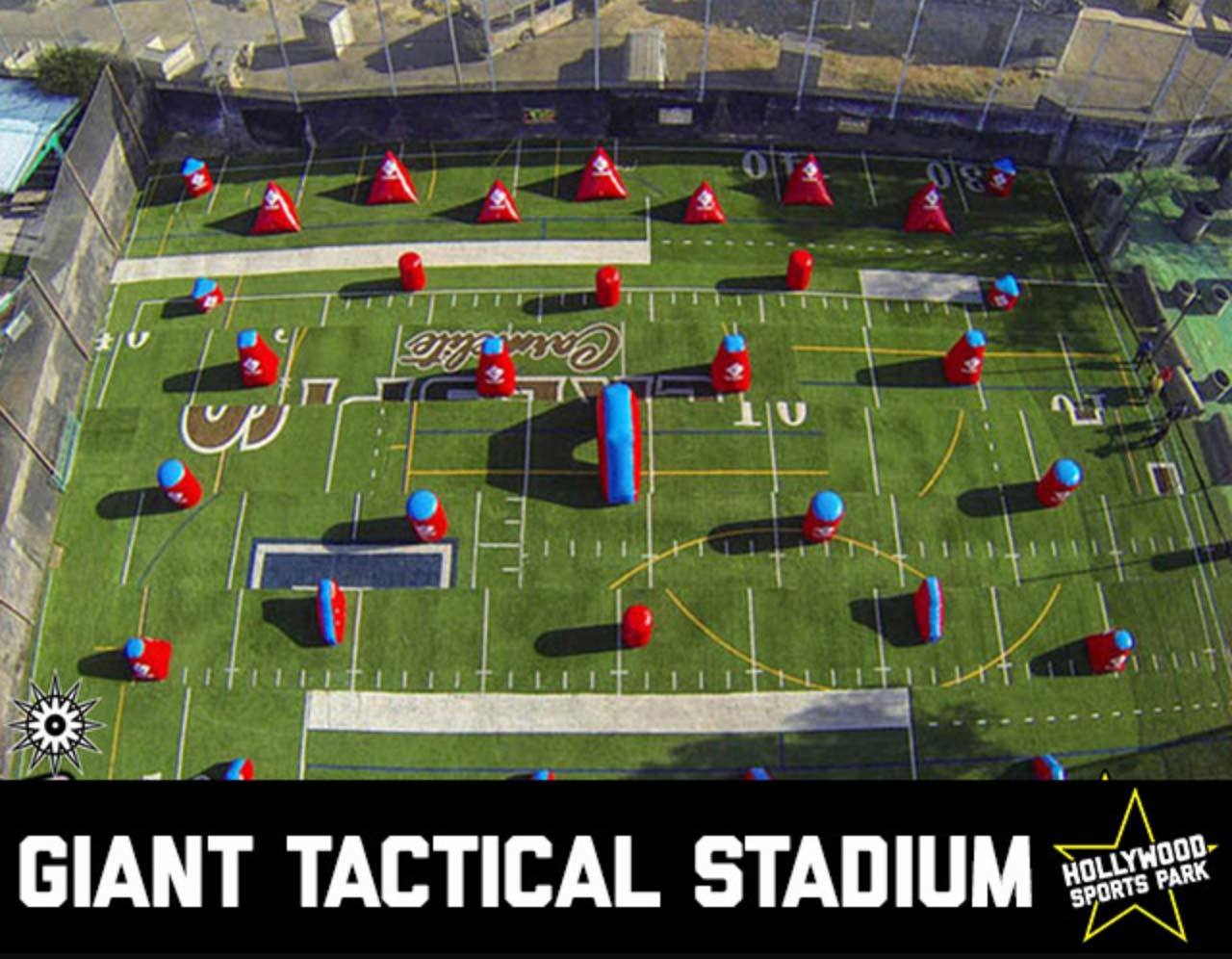 The park also has a banquet center for bachelor or bachelorette parties, film showings, weddings, and family gatherings.

Many people regard the park as the most themed paintball park in the world.

If you’re in Melbourne, Australia and want to experience one of the best paintball courses in the world, then the Hot Shots is the place to be.

It was voted as the fourth best paintball course in the world and Australia’s number 1 Most Awesome Paintball Skirmish Adventure Park. The only downside of the park is that it allows players of 16 years or older to play paintball. The park offers a mini-course for players ten years or older, as well as laser games. 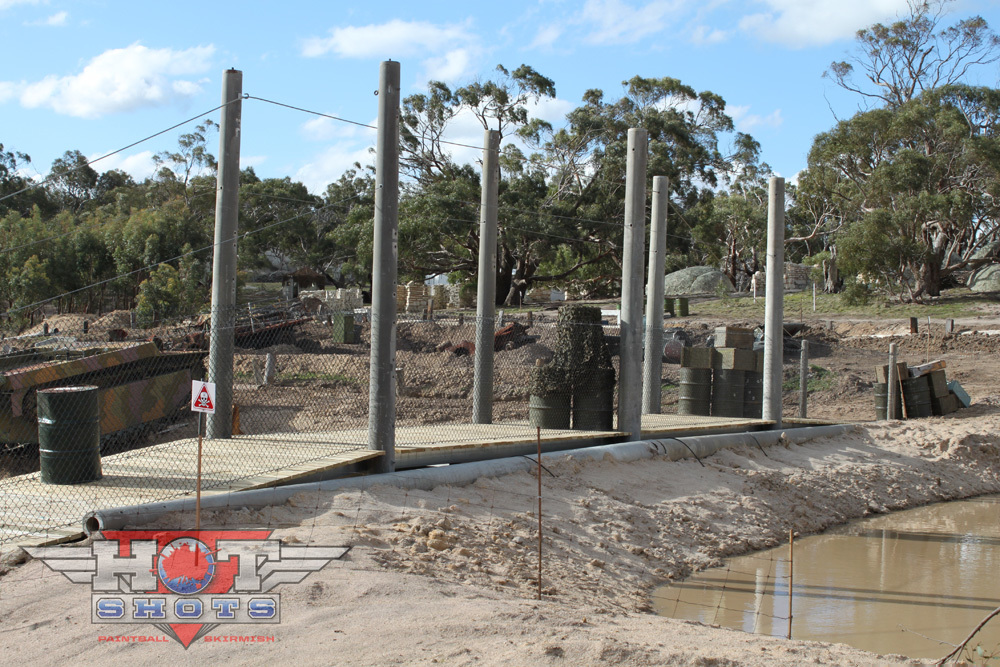 Players will never run out of entertainment at Hot Shots since it offers 11 fields that combine a natural bush setting with fascinating themes such as Wild West town, Egyptian Village, Battleforce Pacific and more. (4)

To make the park more entertaining, the organizers also have special effects, explosions, and sound effects. The park spans over 50 acres and has free BBQ facilities and also offers conference venues for corporate events, bachelor parties, and social gatherings.

The park compares its offerings to Hollywood style designed explosions and special effects. Other courses provided include the Mission Impossible, The Gauntlet, and Assasin.

This place is one of the most exciting paintball courses not only in the world but also in New Zealand. Situated in Auckland, Asylum Paintball offers a unique experience.

Instead of designing an artificial course, the owners decided to convert a former Kingseat psychiatric hospital, which was in operation from 1932-1999, into a paintball course. The designers didn’t disappoint. (2) 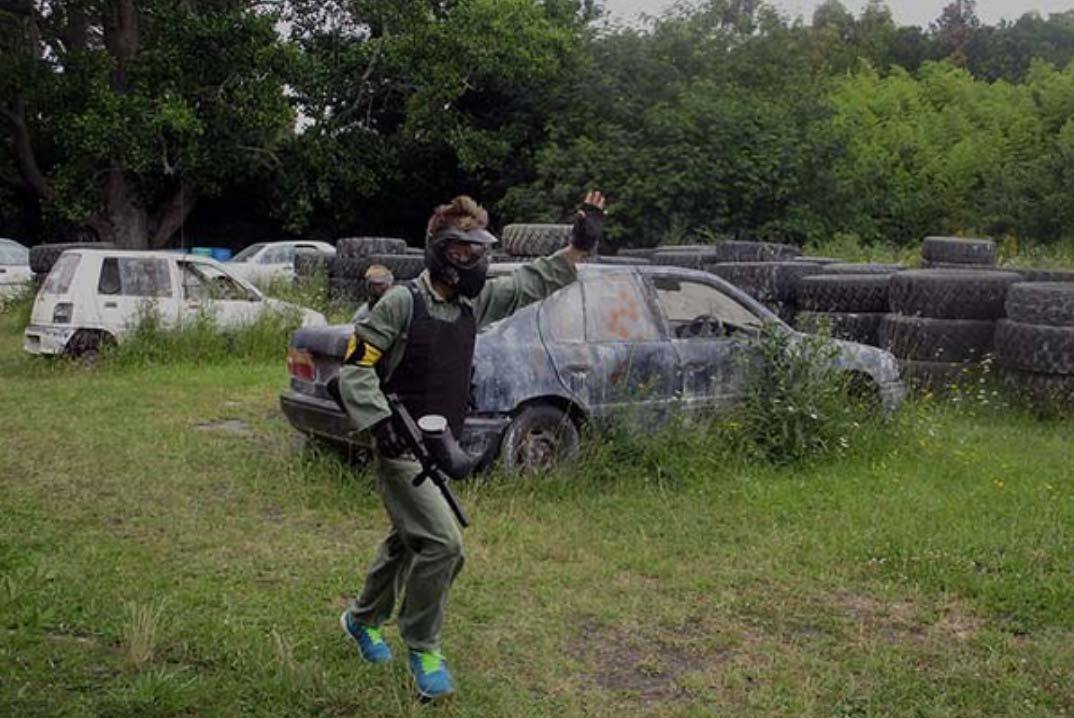 Besides offering packages for just about all ages, Asylum Paintball also offers night games, as well as indoor and outdoor courses. Some of the indoor venues are splat arena, doom arena, and the outdoor arenas are the wrecking yard, tire mania, drums of war and urban assault.

What makes it is that the venue used to be an asylum, so the organizers used the venue’s history to theme the park.

One of the most popular events that the park hosts it a realistic experience is the Asylum Night Terror. The event is a 10-hour Airsoft scavenger-battle through the haunted, former Mental Asylum. (5)

Paintball is a sport that people of all ages and backgrounds enjoy. One of the perks of paintball is that it allows you to bond with your friends or colleagues while getting a workout and learning military strategies.

The aspect that makes paintball really fun is the course. Playing on themed courses and having various options available is what makes the game more exciting. Our listings reveal that regardless of where you are in the world, you can experience state-of-the-art courses.