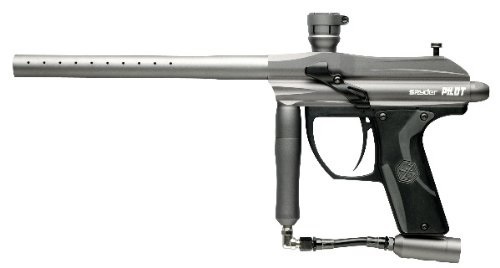 Just because you don’t have a lot of money left at the end of the week does not mean you can’t participate in your favorite weekend activity. Paintball games of every skill level are being played on fields and courses across the country. Often, those on a budget no longer have to sit on the sidelines and miss out on all the fun.

However, things have changed for the better. There are dozens of quality paintball guns such as cheap electronic paintball guns on the market today for under $150 that are capable of getting the job done. These lower-end guns come from the same manufacturers of premium paintball guns. The difference is that they geared towards those with limited funds.

When it comes to buying cheap electronic paintball guns, you could spend around $100 for a quality piece that will certainly get the job done. One thing to consider is looking for package deals that cost around $150. See that you get the gun with a mask, gear, and tanks, for one low package deal price. These are a great deals for those on a budget, and they can get you up and running in short order.

Now that you know where to look for cheap electronic paintball guns, keep an eye out for some other specials too. Many of the paintball guns that will come up for sale at the stores include discontinued models, previous year’s models, and upgraded models. If you consider buying a used one, you could find even better deals than we described here today. If you are in the market for quality but cheap electronic paintball guns, you will not be disappointed with the Spyder Pilot paintball gun. This is a well-rounded shooting device that will allow you to pick off your opponents effortlessly.

Not only does the Spyder have and excellent range of features, but it also has a number of firing models. The gun is ideal for those on a budget, it is extremely lightweight, and very simple to operate. Those shopping for cheap electronic paintball guns who want to enjoy this hobby for years to come should consider getting the Empire BT-4 Combat Marker. Not only is this paintball gun built to last, but it is also customizable too.

Whether you are a beginner or seasoned pro on a tight budget, you can start with the basic model. Once you get the hang of it, you can upgrade as warranted. This gun is extremely durable and will survive years of enthusiastic games.

Although you can get the GTI+ Rampage Paintball Marker at am extremely low price, it is miles ahead of other inexpensive brands. This is an electro-mechanical paintball gun that has features you won’t find in basic paintball guns.

Some of the standout features of this gun include PSP, firing models, NXL, and ramping. Now you can dominate the game as well as those using high-end shooting equipment. You will also gain more experience with the more advanced features not normally found on entry-level guns.

When shopping for cheap electronic paintball guns, make sure you do your due diligence. There are a number of sporting good stores that sell the WGP MG-7 paintball gun for $200. Smart shoppers can find the same gun online from several well-known retailers for under $150.

This paintball gun is extremely fast and comes with eyes. Low price and high performance make the WGP MG-7 a top choice for players on a tight budget. One of the things you want to look for when shopping for paintball guns is more value for the money. The Kingman Spyder VS1 paintball gun is one inexpensive gun. This marker provides the user features you may not find in many low-end electronic paintball guns.

Such a gun is equipped with eyes that help to reduce the chop, and even includes a grip that has either 3-shot burst or on a budget. One of the biggest benefits is the gun is well-made and especially lightweight. As a result, you won’t be dragging after hours on the field.

If looking for cheap electronic paintball guns that are entry-level, you can not go wrong with the Tippmann 98 Custom Paintball Gun. This is a classic paintball gun that will allow you to upgrade as your skill level increases. On top of that, it is extremely reliable on the battlefield.

This electronic paintball gun is capable of keeping up with the big boys. Its construction will also allow you to customize the gun to your liking as you get more comfortable with your game. You might think that looking at the US Army Alpha Tactical paintball gun set that it is too expensive, but looks may be deceiving. Even though this paintball gun has been skillfully crafted to mimic the M16 the Army uses, it is surprisingly affordable.

The paintball gun also comes with a quality stock and barrel shroud. This is the paintball gun that was designed for the Mil-Sim players who are looking for something that is reliable, sturdy, and a close replica of the real thing. Although the Smart Parts Vibe paintball gun is affordable for it is considered to be an introductory paintball gun, don’t let that keep you from adding this weapon to your arsenal. This is an electro-pneumatic paintball gun that is extremely fast, catching your opponents off-guard on the field.

The gun was designed to help get the new players quickly up to speed in the world of electronic paintball guns. Even advanced players can appreciate the high-quality for the price.

Compared to mechanical guns, electronic guns are more consistent, accurate, and can fire faster. They can also be smaller and lighter than their mechanical counterparts. Since the trigger only has to activate the circuit board and do not physically activate the firing mechanism, the trigger pull can be very light and very short, thus allowing you to focus your attention on the game with minimal input. Furthermore, you can operate one with much lower pressure. The downside, however, is that they cost much more than mechanical paintball guns.

Paintball guns and paintball markers are the exact same thing. They’re both terms used to describe the same device: the thing that you use to shoot paintballs at other players during a paintball match.

How do CO2 paintball guns work?

CO2 and compressed air (HPA) are high-pressure gases that are required to power paintball guns. When CO2 is stored in a CO2 bottle, it is in liquid form. Letting only a little CO2 out of the bottle at a time allows for just gas to come out. This gas is what’s used to fire the paintball marker or paintball gun. However, we don’t necessarily recommend CO2 paintball guns because of a few flaws. CO2 paintball guns start to lack at higher fire rates and they also tend to fail in cold weather because they need to operate at least 75 degrees Fahrenheit to convert the liquid to gas.

Can CO2 paintball tanks be filled with compressed air?

You will definitely need a high-pressure air compressor to fill a CO2 tank. You cannot fill them with a low pressurized pump or any hand pump which can go only up to 150 PSI. It’s better to stick to the traditional stuff.

Don’t assume cheap means inferior in the world of paintball guns. There are guns today that compete with the best models in features and functionality, and can be bought for as little as $100 in the right market.

Perhaps you own or have found a paintball gun that would be a perfect choice for someone on a tight budget. Share your experience here so our readers can take advantage of that information when shopping for a paintball gun.