What is the Best Paintball Hopper?

In the sport of paintball, performance is everything. Gun, gear, and team must be the best of the best in order to succeed. So choosing the best loader, or hopper, as they are more commonly referred to, is important to peak performance.

But which one is the best? There are many hoppers out there, at many different quality and price points, and the choice may seem difficult. Luckily, unlike paintball guns, loaders are more universal, that is, more players use the same loader than the same gun.

Below is a table that compares several popular hoppers, their prices, and several other key factors that further define the loader. For simplicity’s sake, all loaders listed are electronic, as all gravity-fed hoppers are essentially the same.

*Price may vary based on color or upgrade options. 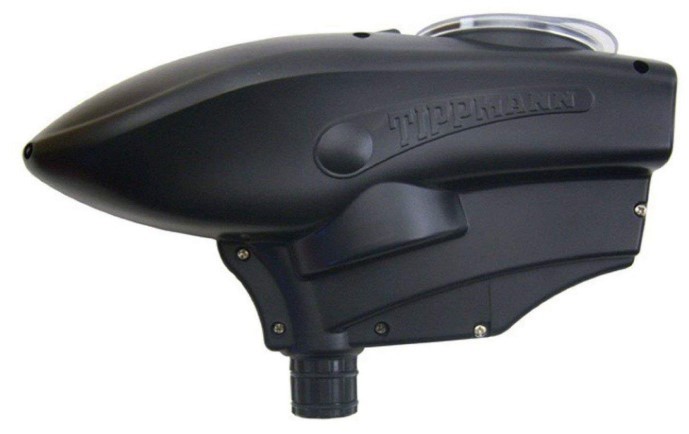 A great choice for beginners or woodsball players. Very quiet, but not the fastest loader.

It can, however, take a beating, and holds a good amount of paint.

The Empire Halo Too is an excellent choice for speedball beginners. It can feed over 20 balls-per-second, allowing it to be used with any electro-pneumatic gun.

If you plan on diving into a bunker, however, make sure not to land on it; its plastic is notoriously fragile. 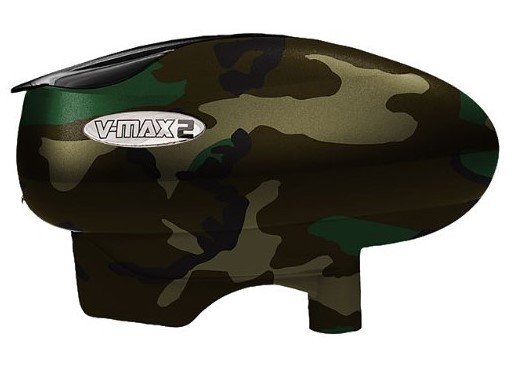 A solid hopper for any scenario, and at a great price too.

It's durable, fast, and high-capacity, making it perfect for long days of woodsball, or quick points of speedball. 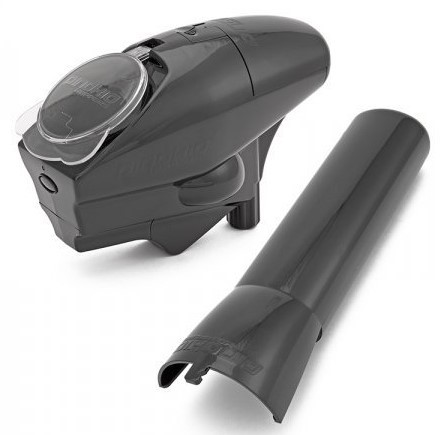 One of the more eccentric loaders out there.

Pinokio is most famous for their optional front nose cone that adds 140 balls to your capacity, as well as giving you one of the most unique looking hoppers on the field.

Its high profile (or optional very-high profile) isn't fit for speedball, however. Good battery efficiency and ease of maintenance. 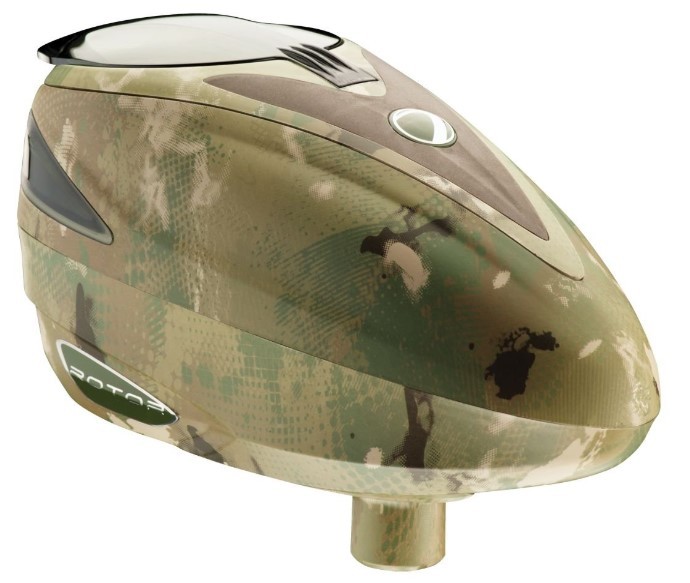 A top-of-the-line hopper, the Rotor is used by tournament players the world over. Legendary for its solid design and ultra-fast feeding.

The Rotor will keep you going through any game of paintball. Tool-less disassembly and an anti-jam lever complete the package. 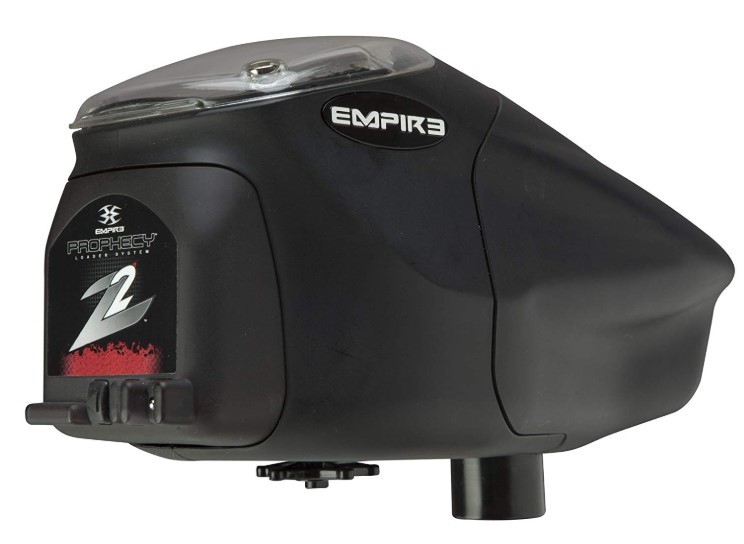 Another high-end loader choice, the Prophecy Z2 is a big step up from the original Prophecy, offering sound-activated force feeding and infrared sensors that prevent jams. Unfortunately, all this technology makes the Z2 heavier than most hoppers. 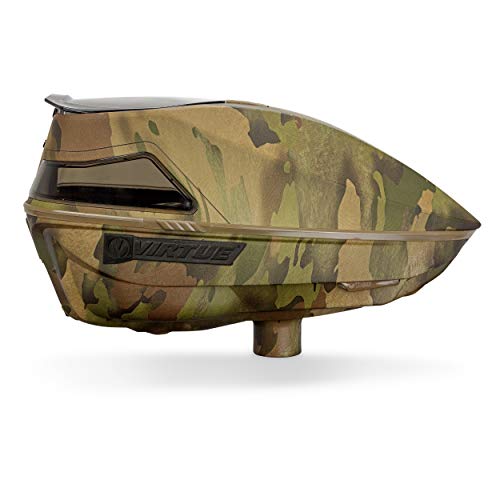 The Virtue Spire uses a philosophy of big and simple to keep operation consistent and reloading easy. With a big, open loading area, and quick, tool-less disassembly, the Spire makes a great choice for any aspiring paintball player. 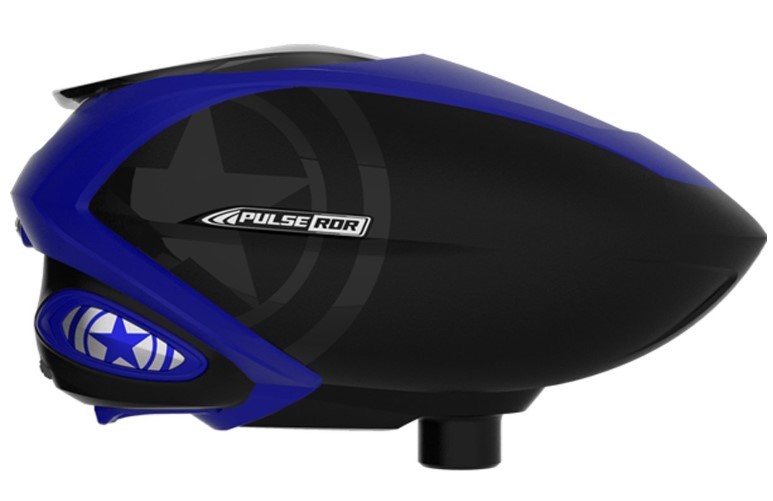 The Virtue Spire uses a philosophy of big and simple to keep operation consistent and reloading easy. With a big, open loading area, and quick, tool-less disassembly, the Spire makes a great choice for any aspiring paintball player.

Capacity is the approximate number of paintballs that the loader can hold without over- or under-filling it. It’s hard to get the exact number that it can hold, due to the uneven shapes of the loaders, and the spherical shape of the paint.

Anyway, capacity is very important for all play styles, especially those who wish to use pods on the field. When reloading, it’s important to have a hopper that can hold more paintballs than the pod itself (usually between 140 and 180 balls) so that you don’t waste paint.

Capacity also affects weight. Keep in mind that the hopper will weigh considerably more when filled with paint, and adding even 50 more balls with a hi-cap is already a 25% weight increase.

So, for example, scenario players who plan on being out in the field for hours on end may not want a high-capacity and have to not only have a heavier weight on top of their gun, but also more paint on their back to fill it.

In the end, however, unless the player is counting paint as it comes out their gun, capacity is not as important as having enough paint on their back to consistently refill the hopper.

How Reliable Are Loaders?

Even purely gravity-fed hoppers can be unreliable, so force feeding loaders that can spit out 40+ balls-per-second, understandably, have a higher degree of malfunction.

That being said, hopper technology has advanced a long way from the earliest electronic loaders, and any choice, especially one from the table above, will give what it gets.

In other words, maintenance is really, really important with loaders. Keeping them clean, paint-free, and juiced up is key to allowing them to feed paint reliably. If dirt or excess paint gets into any loader, regardless of price, it will jam or malfunction eventually, usually sooner than later. T

ool-less breakdown comes in handy for maintenance, but no matter how it gets taken apart, it has to be done periodically. Another point to make is the quality of the paint. Low grade paint can be dimpled, oblong, or greasy (also known as “sweating,” when the water inside the paint condenses on the outside, usually on hot days).

This can severely affect loader performance, even more so than proper maintenance. Make sure there is no broken, uneven, or dimpled paint in the hopper, or else it is liable to break down.The reliability judged in this guide is that of a clean and working loader with good paint going through it, and also of how long the loader in question maintains that reliability.

Some hoppers have systems that just don’t feed paint as reliably, but trade it for being softer on brittle paint, or feeding faster.

Okay, What About Durability?

Most hoppers are made of plastic, but the type of which can vary. Generally, any hopper that is made of clear plastic should be considered weaker; don’t dive or drop it.

Most high-end loaders will not crack or break apart (although Empire’s loaders have a history of breaking apart at their seams), and they can all stand up to a direct hit from a legal most paintball gear, but sometimes the internals are what breaks first.

All electronic loaders rely on some proprietary system that feeds paint down the feed neck and into the gun. Some are more gravity-reliant, while others force the paint through a rotary and down the neck (Dye’s Rotor is most paintball gear of this).

These internal parts are made to stand up to drops and shots, but are obviously more sensitive than the shells. So the outside must protect the insides, and how well each loader does this is essentially what durability boils down to.

How many paintballs fit in a hopper?

In most paintball hopper models, you can fit about 200 paintballs, and there are loads of modern paintball hoppers that can empty an entire load in under 10 seconds, which is quite impressive given the nature of the game. However, we don't recommend emptying a hopper so fast due to the fact that this rate of fire can really hurt your opponent even if they're dressed in a full battle gear.

How does a paintball hopper work?

First, you need to know that there are two main types of paintball hoppers: gravity hoppers and electronic hoppers. Once you realize this, we can get down to how each one of them works:

Gravity paintball hoppers are basic paintball hoppers attached to the feed neck of a paintball gun that feeds paintballs into it by allowing them to drop into the gun’s breech simply by gravity. The downside is that you can't feed them too fast. At most, you can only feed them ten or twelve paintballs per second, which can be really inconvenient when you're trying to reload. You'll also find chewed paintballs and you'll have to shake the hopper every so often.

As long as the hopper's size is compatible with your gun, yes, you could say that the particular hopper is universal. The size is just about the only differentiating characteristics between these hoppers most of the time. However, you should be aware that some manufacturers might make their paintballs with proprietary feeding mechanisms to maximize their profits.

Which Loader Is Right For Me?

Like most paintball gear, the best choice is the one that feels best for the user. Getting the chance to try a loader out is really handy, and it will give you a chance to see how easy it is to maintain, how quiet it is, and other qualities that can only be ascertained through ownership.

The loader has to match the style of play, so speedball players will want to try high-end, high-performance loaders, whereas woodsball or scenario players should look at durable loaders that can deal with long days in extreme climates.

In the end, though, hoppers are a very personal preference. The phrase, “if it isn’t broken, don’t fix it” comes to mind, and if a certain hopper works for a player, then there is little reason to change it. It’s more important that a player be comfortable with their gear than happy about how it looks.

So there it is! Hopefully this guide will provide enough information to select a new loader. Remember, there are dozens of choices out there, and the best way to choose is to get hands-on with them.

So get out there, try out some hoppers, and buy with confidence, knowing that your next ball is ready to feed!