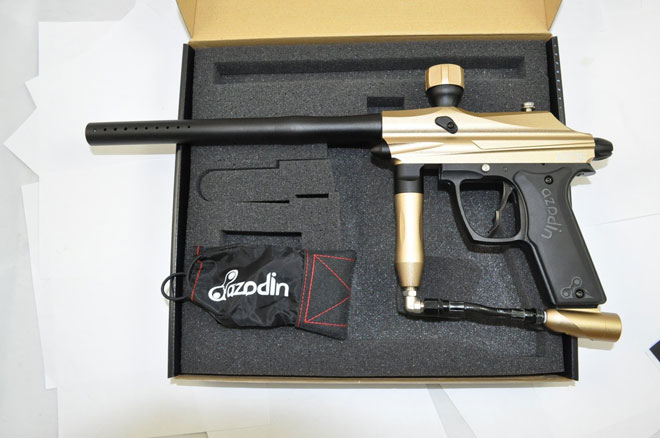 The Azodin Kaos paintball gun is built with the latest technology on the market. The product comes equipped with a few of the features that are typically reserved for top of the line paintball markers. It’s a semi-automatic marker used by an array of players. Usually, its target demographic is entry level paintballers. It retails for around $90. Just about every experienced player who tries it out seems to agree that it is one of the better guns available on the market for under $100.

This blowback mechanical marker has a 12-inch single piece barrel, a gas thru fore grip, and an aluminum grip frame with a direct screw mount and dovetail. It operates on either CO2 or HPA, also known as compressed air.

Other features of the Kaos include double ball detents, a top cocking pull pin, an autococker threaded barrel, and a self-lubricated Delrin bolt. The product also comes with a low rise twist lock feed neck and non-slip rubber grip panels.

The marker’s design is a blowback mechanical stacked tube which means that the bolt rests above the hammer. The fore grip is air through style, and there is a very light all metal body. Moreover, the Delrin bolt is simple to operate and releases quite quickly. It also helps to decrease the marker’s weight as well as its drag. The profile is small and all in all, the Kaos weighs merely 2.1 pounds.

Found on few markers the dual ball detents of the Kaos work to ensure that no balls slide down the barrel, regardless of the size that the player utilizes. It now has a twist lock feedneck that is easy to tighten. The same component holds the loader on without any trouble.

The Azodin Kaos paintball gun features auto-cocker threaded so it can be paired with a myriad of barrel upgrades down the road. While the marker can be operated with either compressed air or CO2, most players who choose to pay the $90 or so for the Kaos will likely make use of the CO2 version.

The Azodin Kaos paintball gun doesn’t feel or operate like a bargain basement paintball marker. Since the marker’s striker weighs about a third less than competing blowback style markers, its internal parts aren’t as burdensome when the marker is fired.

The result is minimal recoil and extra comfort for the shooter. The marker feels comfortable in your hands thanks to its rubber grip frame panels.

Many players compare the Kaos’s performance to that of Spyder and Tippmann markers. The marker features a quick action double trigger with a consistent pull. The hopper is gravity fed and allows for about 9bps and 15 fps.

It is more accurate than you would expect for a marker in this price range. Compared to other mechanical guns, it is one of the best in terms of long-distance accuracy. You can operate the marker from 50 plus feet. This way, you’ll be able to hit your target with relative ease.

Most players think that the stock barrel is fine and doesn’t need upgrading. Players also love that the marker goes easy on the paintballs. It hardly ever breaks a ball in the barrel when standard style balls are used. Only the cheaper and more brittle balls will pose a risk and a small one at that. The marker’s velocity can be adjusted with the use of an Allen wrench. Use the wrench beneath the bolt on the back of the marker. This way, you’ll be able to alter its velocity in mere seconds.

The bolt is simple to remove and clean. It is made of Delrin which is a very light yet formidable plastic composite. To remove it, players merely utilize the pull pin on the top of the marker.

In the event of a ball break, all that’s necessary is a single maintenance step. Lift up on the pin, and the bolt will completely slide out of the marker’s back. Afterward, slide a squeegee into the barrel or clean the bolt and re-insert it just as it came out. In the end, you’ll be ready to re-join the action.

Overall, the Kaos is surprisingly durable and reliable for a low-end marker. The product made it on the list of good but cheap paintball guns.

Aside from the Kaos’s low cost, players typically rave over its comfort. It’s extremely easy to hold for extended periods of time. The Azodin Kaos paintball gun is light and ergonomically friendly. Players of all sizes will find that the marker feels natural in their hands whether they are on the run, lying on the ground, crawling or jumping.

Players also note that the marker’s trigger has just the right sensitivity. Most users feel that the marker doesn’t need to be upgraded. That’s because its base performance goes above and beyond expectations. Therefore, instead of saving your money for add-ons, save it for an elite level marker that you can purchase a few years down the road.

Players have few complaints with the Kaos. The most common criticism is that the marker’s locking feedneck doesn’t connect tightly with all types of hoppers.

Some players have also complained that the marker’s lighter than normal striker. This causes it to be a bit loud when it fires. Others have complained that it’s not electronic and that the air source adapter is underwhelming. Nonetheless, most of these qualms are characteristic of just about all other mechanical markers.

Paintballers on a budget or those who are new to the sport will enjoy playing with the Azodin Kaos paintball gun. Overall, it is a solid mechanical paintball marker. Anyone can hold it with ease, no matter how diminutive they are in size. It’s perfect for younger players as well as those who simply want to have fun playing paintball without making a significant investment in a marker.