The Tippmann X7 Phenom runs at $399 as a new Tippmann X7 paintball sniper. It is equipped with a FlexValve technology that operates below 300 PSI for optimal air efficiency. You'll be able to lick off 1,400 shots from a 4500 PSI tank with ease. The X7 Phenom is the first ever electro-pneumatic gun to provide a series of highly coveted upscale marker niceties in combination with one another.

These features include manual and electronic firing modes, excellent accuracy, superior air efficiency and the ability to use either compressed air or CO2. It really is the total package for those in search of a high quality tournament marker.  In particular, woodsball players will take a liking to the X7 Phenom.  Let's take a closer look at the marker.

This .68 caliber marker is built with a Spool Valve design to minimize recoil. You'll experience hardly any kickback when you fire the X7 Phenom and as a result, you'll have a much more accurate shot. If you were to survey X7 Phenom owners, the vast majority would have no complaints about the marker's accuracy. Not only is the marker accurate but it is extremely quiet as well.

Its hopper can hold up to 200 balls. Thanks to the new cyclone feed system, paddles create a feed rate of 20 BPS, a firing rate of 20 BPS and it has an effective range of 150 feet. The marker fires every time you press the trigger without exception. All of this is possible without the use of batteries. 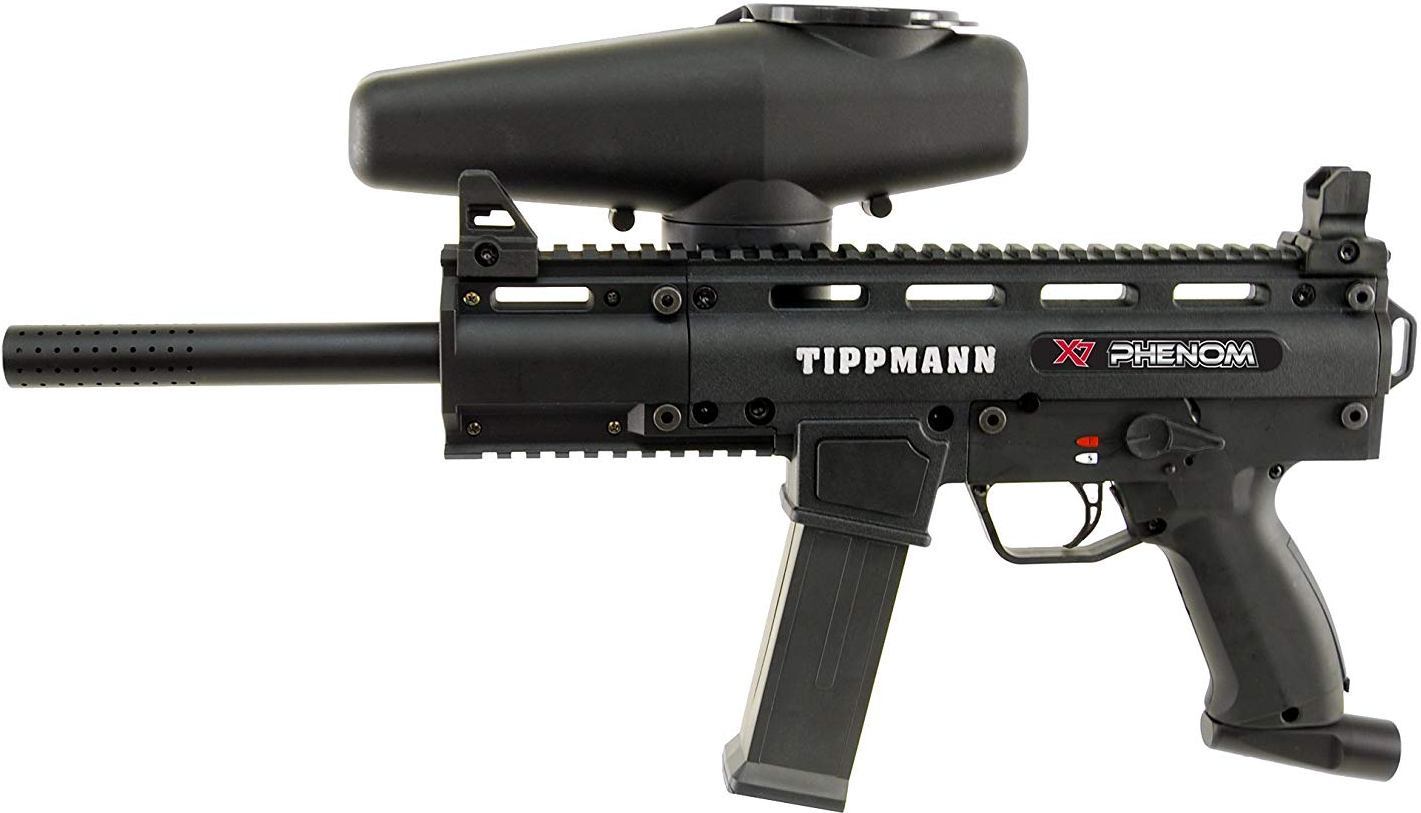 The trigger is made of all metal for improved stability. There's a three position selector switch that allows for up to five firing modes. There's also a nice “E-grip” style design that lets players flip a switch to enter semi mode. Other modes include 3 shot, Full auto and Full auto response.

In terms of the feel of the shot, there isn't much wobble. The grip is easy to hold and provides a stable foundation for the ensuing minimal recoil. The push pins are rigid and there's absolutely no rattling when the gun moves.

Players will like the fact that Tippmann put a coil around the air line that connects to the cyclone for additional protection. The trigger is extremely smooth and the pull is very light. This is a well-built, sturdy gun that shoots better than most other Tippmann markers. In a word, the X7 Phenom's shot feels snappy.

The X7 Phenom has what is known as a searless design that makes use of less wear parts than most other markers. This facilitates maintenance procedures. The marker really is based off of the already existing X7 foundation but is about 3 inches shorter.

Overall, it weighs just under 4 pounds, has a length of 19.75 inches and a stone honed barrel with a length of 9.5 inches. The marker's body is made of a very lightweight aluminum. There's pushpin construction to facilitate quick and easy field stripping. Players also like the quick release magazine and its built-in storage space for tools. 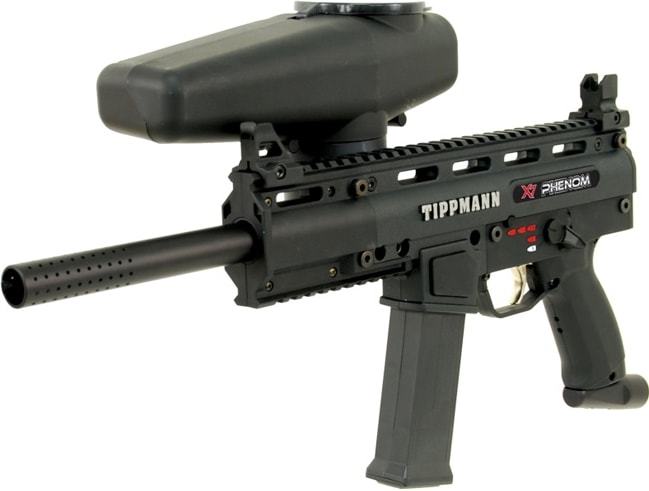 The marker looks more professional and military-esque than most others on today's market thanks to its internal gas line and the fact that there is no cocking handle. It has a very low profile and the hopper is conveniently offset so that the shooter always has a clear line of sight. The marker's internal regulator empowers players to adjust the pressure, which in turn adjusts the velocity.

There's even a diagram available to show you which way to turn the part to increase or decrease the velocity so you don't have to rely on your memory. It's a simple process that really lets you fine tune your shot's velocity to fit the context of your competition. In terms of negatives regarding the design, some players have complained that the X7 Phenom is too bulky and heavy compared to other markers.

The marker can accept over 20 X7 modifications and upgrades. One of the most popular is the Flatline Barrel. You can add all sorts of aesthetic upgrades as well for thousands of different styles. The marker is equipped with a Piccatinny upper rail in addition to another rail to permit the addition of new handles, sights and scopes.

You can remove both the front and rear sights whenever desired. Some will upgrade with a remote line as this marker is heavier than most others. Many have chosen to use an upgraded bolt from NDZ and TechT.

Players love the fact that they can upgrade the X7 Phenom to an electric version from the standard mechanical version. It only requires the purchase of the X7 Phenom e-grip that replaces the mechanical grip. Other accessories and upgrade options include a Dominator Barrel, Deluxe Remote, Pathfinder 14” Barrel, Low Profile Hopper, Freedom Fighter Barrel and a 16” Straightline.

However, it is worth noting that this marker is fairly heavy. It is prudent to avoid adding additional equipment that will significantly increase the marker's already substantial weight.

The X7 Phenom comes with marker lubricant, a barrel blocking device and a general maintenance pack to take care of all the other upkeep involved with the marker.  Since there is no external air hose, the X7 Phenom is that much easier to clean than plenty of other markers.

Be sure to keep the marker's cyclone clean and apply grease along the ratchet as well as oil to the piston. You'll be able to use this marker for years and the cyclone will almost surely stay intact.  Like all Tippmann Phenom markers, the X7 Phenom comes with a two year warranty.

If you are willing to spend $400 on a paintball marker, the Tippmann X7 Phenom is absolutely worth your consideration. This is a versatile marker with plenty of power. It is ideal for the woodsball paintball player who requires a lightweight marker that is very easy to handle and can be fired on the run without a hitch.

While it is a bit on the heavy side, there really aren't many more commonly held criticisms of the X7 Phenom. You can upgrade it to your heart's content and it will provide you with years of high quality paintball play.