The Tippmann A5 is a rapid fire marker that makes use of a patented Cyclone Feed System. This system connects the air system to the feeder sprocket, empowering the A5 to rattle off shots faster than most markers. It's perfect for both casual beginners and intermediate players who are looking for a leg up on the competition

The A5's loader is shaped like a star and located within its cyclone feeder. The loader cycles shot by shot by making use of the same air pressure that shoots the actual paint balls. This lets players fire off shots at quite the fast pace. Since there's no need for an electronic loader, paint balls are guaranteed to load and shoot. There's no risk of missing a shot with the A5. 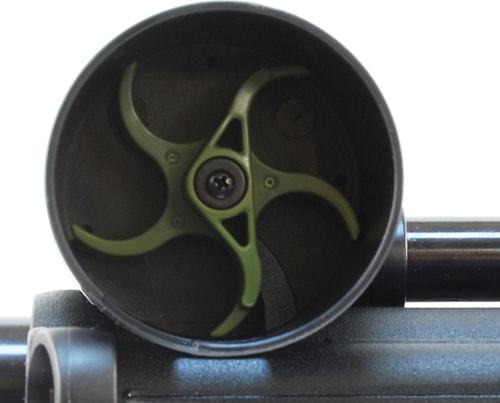 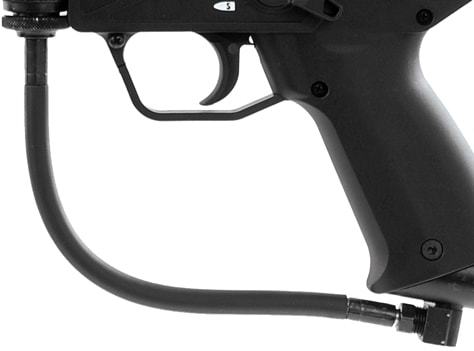 Visually, the gun looks fairly similar to a lot of other popular markers. It can be purchased in either silver, black or camouflage. There's a fore grip, a bottom line and the previously mentioned Cyclone Feed System. There's also a front cocking rod on the left and a plunger on the right that manually advances the feeder.

The main difference between the A5's aesthetics and other guns is its length. Its body is quite long compared to other markers. Yet the extra length doesn't provide any problems in terms of handling. Your hands and arms don't feel strained when holding the marker.

The marker can even be taken apart and then reassembled in a mere minute while out in the field. You won't even need tools to put the A5 back together thanks to its unique "no tool field strip" feature.

You merely need to remove the barrel, insert a squeegee and lube all of the marker's moving parts. While many owners have complained that the no tool field strip feature has a steep learning curve, once you master it, you'll love its efficiency.

Yet it is more than just efficient. It is built to last. There's a full aluminum die cast receiver along with a durable black finish that seems impossible to blemish. There's also an end cap with shock absorbing technology to cut down on recoil and wear and tear.

It's equipped with a front knob that cocks to completely close the receiver. The hopper is wide mouth and holds 200 rounds.

Players who would like to modify their A5s will have no shortage of options. You can choose from a variety of accessories like sniper barrels, a Response Trigger System, a double trigger, a Flatline Barrel System, a collapsible stock, an expansion chamber kit and much more. It can be operated with either CO2, nitrogen or compressed air.

While the A5 isn't the lightest or fastest marker on the market, it is durable, affordable and presents numerous upgrade possibilities. Combine all of these strengths and you have one of the most popular paintball guns around. Its popularity isn't limited to one type of paintball player either. Casual ballers use it as do some of the intermediate to competitive players. 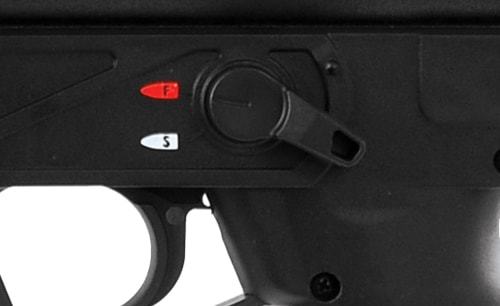 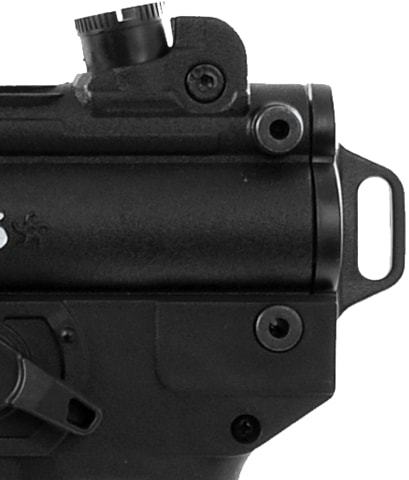 It's difficult to find a gun that is more customizable or a gun that will hold up to as much wear and tear. It rattles off 15 to 17 balls per second thanks to its uber efficient cyclone feed and it doesn't require batteries.  In short, it has a universal appeal that plenty of other markers lack.

If there are any criticisms of the A5, they would begin with its weight. While it is capable of firing off shots at quite a rapid clip, it weighs more than many other guns. The A5 is accurate compared to other mechanical markers but it doesn't provide the pinpoint accuracy of more advanced markers like the eletro-pneumatic variety.

It's accurate enough to shoot another competitor from a considerable distance but once you are 40 plus feet from your target, you'll notice that it isn't as consistent as desired. It is worth noting that some owners have complained that the trigger is a bit stiff to pull.

Although the A5 is easy to disassemble, many owners have complained that it is quite difficult to fix compared to other markers. While several other markers in the A5's price range have parts that are compatible with other markers, the A5's parts can only be utilized with the A5. Some owners dislike the no tool field strip feature.

It has been reported that it isn't as simple as Tippmann makes it out to be due to overly tight push pins and the fact that its easy to discharge a paint ball during the process. Yet if a ball is squashed within the gun, it can be somewhat cleaned out after shooting several rounds. Still, accuracy suffers when there is paint smeared along the insides of the A5.

The Tippmann A5 is the ideal marker for beginning players. Paintballers on a budget will love its low price point. You can find one for $200 to $250 with ease (lowest price). For all that the A5 offers, this is an excellent deal. It comes with a one year warranty as well.

Anyone who picks up the A5 and has issues with accuracy can simply pick up the Flatline barrel and they'll experience much better results. With a few customizations, the A5 becomes an effective gun for competitive players. The bottom line is that the A5's mass appeal makes it worthy of a purchase.