Tag Archives for " Revolutionary Marker for the Paintball Enthusiast "
0 The Planet Eclipse CS1 And CS1.5 Review – The Revolutionary Marker

When it comes to paintball, there 2 major factors that determine whether you will emerge victorious or come out of the game with your head in shame – your skills and your equipment. Thus, it is very important that you practice as much as possible to develop and refine your skills and also equip yourself with the best marker and kit possible.

That is why you should consider arming yourself with Planet Eclipse’s CS1 or CS1.5 marker kit.

When it comes to paintball equipment, no other name rings louder than Planet Eclipse. From innovative designs to reliable functionality, they eclipse other players in the equipment field.

Planet Eclipse was born in a small paintball shop located in Manchester, England, called Paintball Planet in 1991. The staff of this small outfit all had one common passion – supplying “ballers” with the best technologically advanced paintball equipment on the market. And that passion drove them to shift gears from being just suppliers to being creators – creators of the top quality paintball equipment they were passionate about.

Today, Planet Eclipse is a renowned manufacturer of reliable, quality, and advanced paintball equipment and accessories.

A few years ago, choosing a paintball marker was very easy. All you had to do was enter a shop and browse through the 2 or 3 brands available. Fast forward to today and things are completely different. Picking a paintball marker can be a nightmare, what with the thousands of options to pick from. Don’t get me wrong, having lots of choices is good, but when the choices become virtually limitless, then having choice becomes a burdensome headache. To reduce that headache, we’ll review one of the top contenders in the paintball marker kit department – the Planet Eclipse CS1.

Planet Eclipse CS1 and CS1.5 Review – More than a Facelift, it’s a Revolution

Hoseless, But Definitely Not Powerless

One of the biggest changes that come with the CS1 is the internalization of all hoses and pipes. Planet Eclipse redesigned the positioning of the inline regulator, placing it inside the frame. This not only gives the Planet Eclipse a sleeker look but totally improves the marker’s performance. This upgrade ultimately translates into the CS1 being able to run on a wide range of outputs, from 250psi to 850psi to be exact. This means you can use any tank within that range – low, medium, or high.

The internalized hoses make the Planet Eclipse CS1 function at 120psi, unlike its predecessor that functioned at 130psi. Don’t let the drop in figures fool you though. The CS1 still packs a powerful punch that makes it one of the best markers available. In fact, pressure drops in the tank won’t affect performance as the new design allows the CS1 to shoot deep into the tank.

The rear grip frame of the Planet Eclipse CS1 has received a major facelift – nay, a complete re-design. More emphasis has been placed on ergonomics, grip, and fit of the marker. Gone are the soft lines and curves that were so familiar with previous models. They have been replaced by hard angular edges and notches for a more comfortable feel of the marker in your hands. The grips run harmoniously into the frame, body, and POPS, giving the CS1 a more appealing look. The new grips have microtexture to give you a firmer grip despite the worst conditions, be it a wet rainy day or any unfortunate contact with slime or oil. And at a mere 2 pounds, the Planet Eclipse will feel like a natural extension of your hand, increasing your accuracy.

Ask any marker manufacture and they will tell you that one of their biggest challenges is finding a reliable and efficient power source that is small enough to satisfy the markers needs and compact enough to fit in the marker. Well, Planet Eclipse solved that problem in the CS1. One of the revolutionary upgrades the Planet Eclipse CS1 received was a more efficient, advanced, industry leading electronics system. Running at a surprising 3V, the Planet Eclipse CS1 now runs on 2 AA batteries, unlike the previous Geo’s 9V batteries. Economically, this means less running costs, and on the field, a super surprising 500K shots. Now, that’s revolutionary efficiency to write home about. And when the 2 AA batteries run out, all you need to do is slide open the battery housing, replace them, and close it back again. Talk about super simple.

The Planet Eclipse CS1 uses an SL5 regulator – an updated version of the SL4 – one of the industry’s leading regulator models. But the SL5 regulator is not the only technological advancement in the Planet Eclipse CS1. After passing through the regulator, air is fed through the frame directly into an all-new ISCIS3 (Innovative Solenoid Controlled Isolation System) solenoid assembly. This set-up means air doesn’t travel through any bodywork first. This advanced technology utilizes enclosed and captured gaskets rather than cheap O-ring face seals for all gas transfer ports between components. This makes the Planet Eclipse CS1 more reliable, durable, and able to deal with very high pressures without of blowing out or leaking. 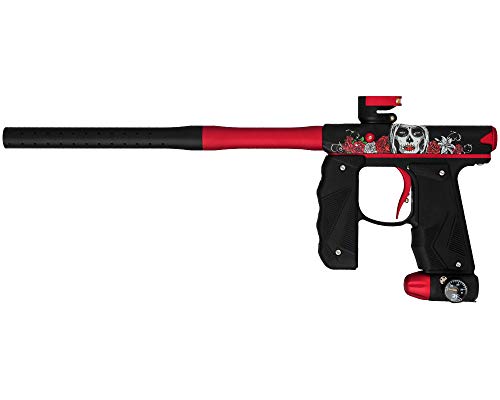 Planet Eclipse manufactured their own ultra-low power solenoid for the Planet Eclipse, a single spool assembly that serves the dual purpose of controlling the position of the bolt and the air supply into the firing chamber during the firing cycle. And because the solenoid is driven by a custom SMC pilot valve that is over-rated for this application, the solenoid is robust and durable enough to handle the worst conditions a paintball marker could go through.

Apart from the new ISCIS3 solenoid technology, the Planet Eclipse CS1 and CS1.5 feature the next generation IVCore drivetrain assembly. The Planet Eclipse’s IVCore is legendary in being the first commercial system to introduce true decoupled breech-sensing valve technology to a paintball marker system tuned for reliability and efficiency whilst also being completely dwell insensitive. And this latest generation drivetrain system sports increased volume for the firing chamber, a modified bolt port geometry, and a larger adjustment range for the SFR. These changes combined with the significant new changes to the marker layout mean that all aspects of the shooting experience have been dramatically improved. The results are a smoother and quieter experience.

These technological improvements ultimately mean the Planet Eclipse CS1 is more efficient, powerful, durable, and lightweight – giving you a marker that will tremendously improve your game.

Maintenance and Service – Easy as Pie

Planet Eclipse pride themselves on customer satisfaction. And one way they set about doing just that is by designing and creating a marker that is completely user serviceable. In other words, if ever needed, most of the maintenance and repair can be done at home by you the user. This is one of the major advantages of housing the hoses inside the frame, as opposed to having dangling tubes and places to plug them in – maintenance is greatly reduced. No one likes a high maintenance product, after all, high maintenance means extra costs.

With the Planet Eclipse CS1 and CS1.5, maintenance is kept to a bare minimum, meaning what you pay for is ultimately the only significant cost associated with the marker. In fact, the only maintenance you may need to carry out routinely is the battery replacement, and that is a simple tool-less procedure that takes a few seconds thanks to the new design.

The Planet Eclipse 1.5 – Evidence of Evolution

When Planet Eclipse released the CS1, it seemed as if they had reached the pinnacle of development on this line of markers – after all, perfection can’t be perfected can it. But it seems it can. Planet Eclipse decided to bring improvements to the already improved CS1, resulting in the CS1.5. I guess this is a true example of evolution, taking perfection and improving on it.

The Planet Eclipse CS1.5 came with a few slight improvements to the CS1. Slight in terms of sight, but drastic in terms of feel and efficiency.

One such improvement is the addition of the hugely popular Shaft FL carbon fiber barrel system for purposes of saving weight and enhancing the marker’s performance. The Shaft FL barrel resulted in the CS1 shedding over 10% of its weight – from 2.16lbs to 1.97lbs – a significant drop that really shows in long games.

On the cosmetic side, the Planet Eclipse CS1.5 has a new low-profile feed neck with self-locking sprocket thumbwheel that helps in streamlining the CS1.5’s profile. More notable design changes include the CSR Blade trigger, a CSR inspired frame, and a bespoke CS1.5 custom milled body among others.

The Planet Eclipse CS1 and CS1.5 – Revolutionary Marker for the Paintball Enthusiast

At the end of the day, when it comes to the Planet Eclipse CS1 and its improved CS1.5 counterpart, there is only one thing that can be said of the upgrades and improvements – revolutionary. Whether it’s the internal upgrades or the external cosmetic look, Planet Eclipse truly outdid themselves with this epic marker. Come game time, you’ll be glad this is your weapon of choice.